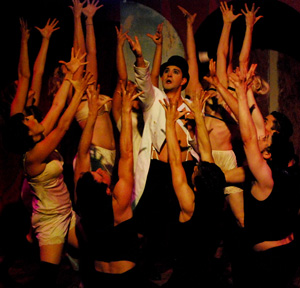 Set in 1931 Berlin as the Nazis are rising in power, “Cabaret” revolves around the seedy Kit Kat Klub, its young star Sally Bowles and her relationship with American writer Cliff Bradshaw. It debuted on Broadway in 1966, winning eight Tonys before being made into a film in 1972. Directed by Bob Fosse, the movie earned eight Oscars.

Entering a small, utilitarian theater on the east side of Hollywood, the audience is greeted by the cast of Kit Kat Boys and Girls, all slapping each other’s asses and wiggling in audience members’ faces while offering them drinks served from an onstage bar. It’s an attempt at raunchy involvement, but it’s less Bertolt Brecht and more misguided high school theater production. The atmosphere is forced and uncomfortable rather than sexually charged and debaucherous.

Choosing a musical that requires the majority of the cast to master an accent was a massive misstep as well. The cast’s mishmash of misplaced tongues vacillates between laughably bad to horrendous.

The play’s one shining glory is Bonnie McMahan as Helga, a Kit Kat Khorus Girl. Her time on stage, however brief, is rewarding and enjoyable. She is the sole cast member to understand and deliver the attitude and energy required for the show.