Cursive: Exposing Their Ugly Organ to Us All 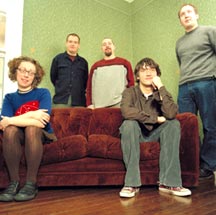 As a self-proclaimed eight-year-old when it comes to maturity, I couldn’t help but give a Beavis and Butthead-esque snicker when I heard the title of Nebraska emo staple Cursive’s new album, The Ugly Organ. Clearly, my childishly perverted mind converted what was meant to represent the abstract, self-brutalizing mentality of the musician into a funny way to say "penis." Imagine my delighted surprise, therefore, when after informing me that he is currently "taking care of last night’s hangover" in a bar, Cursive’s Tim Kasher made the following comment about the title: "The direction we went with it is sexual. We saw the sexuality."

"Yippee," I thought, as I suddenly elevated my intellect to the level of one of current music’s most consistently impressive songwriters. But Tim was quick to qualify, "I really think it’s important that it’s whatever organ that the listener is struggling with or dealing with, whether it’s work or their own creativity or whatever. I think it’s the same internal frustration or internal argument that you would have." Damn Tim, don’t harsh my buzz.

Whatever the Ugly Organ is, it sounds dark, brutal, dissonant, paranoid, evoking horror film tension with Gretta Cohn’s cello, and a twisted midnight carnival with a background of strange organ chords. "I think that probably at its root is this stage that all of us are in," Tim explains. "I think——speaking for myself anyway——it’s [about] getting older and learning more and believing less and kind of getting more disillusioned. I feel like I’m getting angrier instead of more relaxed."

To be sure, there is little relaxation to be found on the album, but Cursive’s creed has always been to tackle difficult emotions in their music. So far, this approach brought the band (and in turn, the Saddle Creek label) considerable success. But, as Tim notes, both in his lyrics and in our conversation, the recognition is a double-edged sword: "It’s really weird to know that you’re writing and know that there’s this fan base waiting for it. And in the self-analytical process, you start to resent it I think. ‘Rock Star’ is a derogatory word. It corrupts what a lot of us are trying to do which is just…we’re trying to write a great 20th century version of music."

Perhaps it’s a sign of the times that what Cursive associates with the 20th century is, as Tim puts it, an acute sense of "frustration and paranoia." He jokingly coins the term "hospital-rock" when I ask if the two weeks he spent with a collapsed lung prior to recording had anything to do with the album’s bleak outlook. But there is something irreconcilably dissonant and brutal about the message evoked throughout the record. Personally, I credit it to the fact that Tim has been touring non-stop with his various projects——Cursive, Good Life and Mayday——for the past many months, and is about to embark on a huge Ugly Organ tour in two weeks. Six months in a van has gotta do something to your sense of positive reality.

But Tim assures me as we wrap up our interview, that there is a major-chord light at the end of the emo tunnel, as evidenced in "Staying Alive," the album’s final track. "I think [the last song] is positive," he asserts. "I think it’s really positive. I think it was something that we wanted to do, because I think we thought that the content of the album was really difficult and maybe a little too brutal or abusive at times, and I don’t feel–I’m not that abusive to myself, you know. I mean, I am abusive, I am self-proclaimed, but I love myself." And so do we Tim. But don’t worry, we won’t tell.