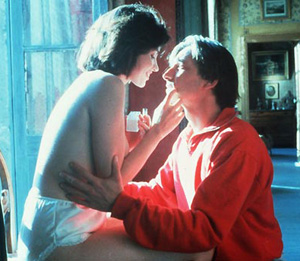 It’s been more than 20 years since Jean-Jacques Beineix directed Betty Blue, but now the director’s cut of this sex-filled dissection of mental instability is being released in the United States with an hour of new footage that is sure to titillate.

Betty Blue focuses on the lives of Zorg (Jean-Hugues Anglade), a handyman-cum-writer, and his disturbed lover, Betty (Béatrice Dalle). Zorg is an unremarkable and unambitious man, living in a bungalow by the beach when Betty walks into his life. Her passionate nature is a welcome relief until she finds Zorg’s memoirs and decides they need a change in scenery … and burns the bungalow to the ground.

When they move to Paris, it becomes evident that Betty and Zorg are devoted to each other, but Betty can’t handle the interactions required of everyday life. Betty fixates on one obsession after another, and Zorg tries to save Betty from herself. But can he before their lives devolve into lies and violence?

The director’s cut of Betty Blue rounds out Zorg and Betty as characters, and you really do get a sense of how much they care for each other. The story benefits from showing how Betty’s madness evolves over a matter of years, as well as adding some necessary comic relief with supporting characters.

Unless you’ve seen the original version of this film (or you’re just a huge fan of seminal French cinema), you might want to skip this. It’s a beautiful film, and the story itself does benefit from the extra footage, but for the casual viewer, man, is it long. At a whopping three hours of subtitles, you might want to take a break halfway through. It actually does move pretty fast, all things considered, and the film is definitely artistic rather than indulgent, but some parts were redundant and three hours is like sitting through a class that only meets once a week.

On the other hand, the film is in turns comic, dramatic, sexy (come on, the opening scene is literally the couple having passionate sex) and tragic. While the story moves slowly in some parts, you can combat this with a drinking game: Take a drink every time you see someone’s naughty bits (seriously, some of those sex scenes are – dare I say it? – unnecessary). Or every time someone does something that’s just plain weird (but you can chalk it up to Betty Blue being a French film if you really need an excuse for this).

In the end, it may be tedious, but the film is, overall, quite an interesting examination of a woman’s descent into madness.


Betty Blue: The Director’s Cut releases in select theaters July 3.
Article posted on 6/30/2009
This article has been viewed 8954 times.