Youssou N’Dour: I Bring What I Love 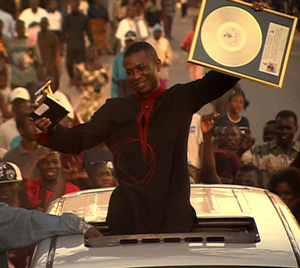 Senegalese pop icon Youssou N’Dour had a vision. Inspired by the Egyptian singer Umm Kulthum, whom he grew up listening to on the radio with his father, as well as by a deep desire to express his love for his Sufi Islamic roots, N’Dour began work on his pivotal release Egypt.

Cheikh Ahmadou Bamba, who established the Mouride brotherhood to which N’Dour belongs, placed particular importance on Egypt as the cradle of African civilization. Enlisting the help of the Cairo-based Fathy Salam Orchestra, N’Dour broke from his typical Senegalese instrumentation to create a melding of Arab strings and wind instruments with Wolof-language tales of Islamic saints.

Created just before 9/11, N’Dour chose to delay the album’s release in the light of negative feelings toward Islam in the west. Finally in 2004, wishing to create a more positive and tolerant counterpoint for his faith, N’Dour at last released Egypt, to tremendous worldwide critical acclaim. That is, with the exception of his homeland.

At home, the Ramadan release of Egypt is met with derision and controversy. As N’Dour is accused of blasphemy and the descendants of Bamba threaten him with a lawsuit, N’Dour and the Fathy Salam Orchestra hit the road for a whirlwind tour of Europe, where the album is triumphantly received. Troubled by the backlash and the ensuing blacklisting of his album back home, N’Dour’s success abroad is bittersweet.

All of that changes when Egypt is nominated for a Grammy. Having received the honor of a nomination several times before, this time N’Dour wins, spurring a change of heart in his homeland, which celebrates its native son with an upsurge of national pride. At last the Senegalese have the opportunity to hear and appreciate the album at the heart of the controversy. A duet with religious singer Mustapha M’Baye further serves to dispel the negative feelings surrounding the misunderstood release.

It’s amazing that Youssou N’Dour, once named among the “100 Most Influential People in the World” by Time Magazine, is so little known in the U.S. outside of his vocals on Peter Gabriel’s classic hit “In Your Eyes.” His humanitarian work alongside fellow activists like Gabriel and U2’s Bono is another highlight of the film along with insight into his treasured family life in the Senegal capital of Dakar.

N’Dour’s exuberance and joyful embrace of life is infectious. This film is a story of triumph over misconceptions, cultural divides and stagnation. Filmmaker Chai Vasarhelyi’s first feature-length documentary is a must-see for anyone with the audacity to believe that music can change the world.