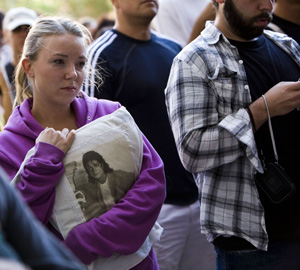 Michael Jackson is dead. As if that weren’t dark enough, Farrah Fawcett and Ed McMahon both passed away in the same 24-hour period as Jackson, giving credence to the theory that everything comes in threes.

Jackson was not just a global phenomenon; he’s a piece of world history. No other performer has had a track record of his magnitude and has touched as many people.

If you’re alive, you know who Michael Jackson is and know at least a few of his songs. Jackson’s music videos were always the best of the best. Instead of doing simplistic videos that subtly captured the essence of his songs, Jackson would opt to do short films with storylines, with the actual music video appearing somewhere in the runtime.

Some of the best ones were “Thriller,” “Bad” and “Remember The Time.” My favorite piece he did was his film Moonwalker that co-starred Joe Pesci and featured the music video for “Smooth Criminal” set in a swanky 1950s speakeasy.

I’m no doctor, but cardiac arrest seems to me to be one of those stress-related conditions, and Michael Jackson was probably an epicenter of stress. It’s no secret that he was taking a trillion different kinds of medications and painkillers; couple that with his turbulent life, and it’s not so much of a surprise that this happened.

I read an out-of-print book a while ago written by a woman who was married to and had kids with Jermaine Jackson, and some of the stuff in the book addressing how dysfunctional the family was and how they treated each other was simply unbelievable. The level of dysfunction of the Jackson family is beyond epic proportions.

And of course, there’s the question of whether or not you believe he was a child molester. I won’t go into what my feelings are on that topic because ultimately, Jackson was a product of the severe level of dysfunction he grew up around.

The emotional, physical and psychological abuse he endured from the time he was a child probably made it impossible for him to develop in any way that could be considered normal. His contributions to the field of entertainment should be how we remember him and not his tragic life.

Michael Jackson is probably the epitome of the tortured artist, and if one positive thing can be taken away from his death, it’s that now he’s at peace.