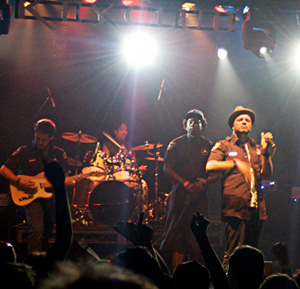 The Elevaters got the crowd rocking.

On the first nice Saturday in June gloom I got to experience two live hip-hop acts at the Mint. The Elevaters took the stage first and instantly got the crowd rocking to a go-go beat that exploded into the first song of the set, “Get Low.”

This seven-man, genre-bending band (in their own words) sprinkled sonic delights from rock, reggae, jazz, rap and back. The equation of three vocalists (two of whom can sing), the Elevators kept the crowd going with their off beat jokes, sharp lyrics and the showmanship of veterans of the Broadway stage.

Up next was Audible Mainframe, a transplant sextet from Boston, fronted by Exposition, a tenacious MC with the lyrical demeanor of Mike Tyson. This high-energy band took the audience to a different level reminiscent of an out of control party at a college bar.

The highlight was their cover of “PSA” by Jay-Z that instantly caught my East Coast ears. This set the stage for “Something Great,” a song with crashing keys and a killer guitar. This was the signature song of the night, showing the crowd that the stage is their home.

Live Show Reviews
So good, so good! At SoFi Stadium, fans celebrate a real, live concert and a worthy cause
1,302 views