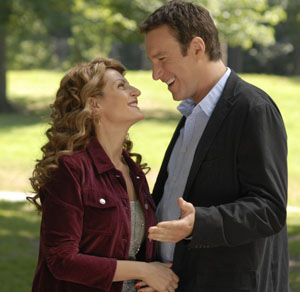 Nia Vardalos created a sleeper hit in 2002, when she wrote and starred in My Big Fat Greek Wedding. Now she’s back – making her directorial debut in I Hate Valentine’s Day.

The film stars Vardalos as Genevieve, a floral designer who loves the idea of love. She believes in all the magic, butterflies and warm fuzzies of falling hard – just without the messy afterthought. That’s why Genevieve NEVER lets a relationship move past the fifth date. And why should she?

On one particular Valentine’s Day, Genevieve’s quaint little flower shop is visited by a tall, dark and handsome stranger named Greg (“Sex and the City’s” John Corbett). He’s just moved into the neighborhood and will be opening a tapas bar just a stone’s throw from her business. Genevieve takes Greg under her wing, and the two begin to date, following her five-date edict.

This sets the pair off on a glorious and passionate romance. However, Genevieve never banked on the impossible: that she would wind up falling for him. Will this goddess of romance be able to rebound from her muddled, complicated feelings for Greg, or will she lose her head (and her heart) in love?

I Hate Valentine’s Day is a very smart idea. I love that there’s finally a movie that weighs in on all sides of the spectrum, giving intelligent points of view about this commercialized demonstration of love. The jilted will feel well represented, as will the bleeding hearts.

Vardalos also looks like a million bucks in the film. She’s believable as the Aphrodite-esque neighborhood looker who can’t be bothered with love’s messiness. She and Corbett still have the same chemistry from My Big Fat Greek Wedding, so that’s a plus as well.

I would have liked to see this movie directed by someone with a little more experience, though. Vardalos is an entertaining writer, but stellar filmmaker, she is NOT. Her pacing is off, many of the scenes are nothing more than a boring establishing shot (lady, I’m dyin’ over here for a little coverage) and some of the performances are rotten to the core. When you’re able to land funny folks like Rachel Dratch and Judah Friedlander, use them for laughs – not to make you look better in three shots.

Still, the overall tone of the film is sweet and has a certain charm to it. And the ending? Call me a romantic, but I melted.


I Hate Valentine’s Day is currently in theaters.
Article posted on 7/6/2009
This article has been viewed 1673 times.