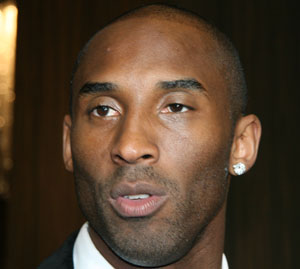 The speakers blared, confetti streamed, fans yelled and players shouted with passion. All the while, Kobe Bryant walked off the parquet floor of Boston’s TD Banknorth Garden as the Celtics celebrated its 17th franchise title.

What started with an enthralling patriotic victory during the 2008 Summer Games in Beijing, China, Bryant completed a rigorous year of victory – winning a gold medal in China and then an NBA Championship – with an honor bestowed upon him by the Asia Society at its annual gala dinner on June 30.

Just moments after announcing he would not opt out of his current contract with the Lakers, Bryant accepted the Global Ambassador Award by the Asia Society at the Beverly Hilton in Beverly Hills, Calif.

“I am honored to receive this award from the Asia Society,” Bryant said. “It has been a privilege to work with so many young Chinese athletes, and young people around the globe. Sports truly is a universal language, and bringing together the youth of China and the United States through basketball is extremely rewarding.”

In addition to the sit-down dinner and honor bestowed upon Bryant, there was also a silent auction featuring sports memorabilia and luxury jewelry donated by Nubeo, maker of Bryant’s Black Mamba watch collection. The Laker Girls also performed a dance number during the event.

“The newly-created Kobe Bryant China Fund will support and collaborate in the efforts of China’s Soong Ching Ling Foundation to bring education, sports and health programs to children across China,” Tang said during the dinner.

In conjunction with the honor, the Kobe Bryant Family Foundation announced it is about to launch a Mandarin-language program in conjunction with After-School All-Stars. The new partnership aims to teach American youth of Chinese language skills and culture.

Basketball
LaVar Ball: Reuniting his sons would be ‘biggest thing in NBA’
1,062 views

Basketball
No Mamba moment, but Lakers got a uniform win over Heat
573 views

Basketball
Heat vs. Lakers position-by-position matchups — or is it just about LeBron?
674 views