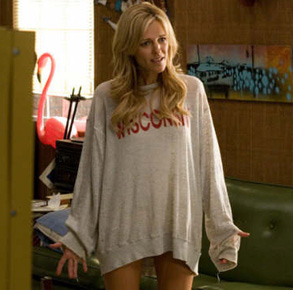 Have you seen the types of romantic comedies that are getting produced for large audiences lately? I mean, really, who saw The Proposal? As far as love stories go, audiences are usually treated to the unbearably sappy (Ghosts of Girlfriends Past), the insufferably pessimistic (He’s Just Not That Into You) or the excruciatingly crude (Year One).

So it’s with a great deal of anticipation that I find what could possibly the most well-balanced romantic comedy is finally hitting (some of) the big screens. Weather Girl premiered at the Slamdance Festival in January, but it’s already made a round of film festival circuits, including the Los Angeles Film Festival (where a third screening was scheduled after the first two sold out), garnering its fair share of wins in various categories along the way and with good reason.

Weather Girl is the story of Sylvia (Tricia O’Kelley), a Seattle weather girl who finds her co-worker boyfriend (Mark Harmon) has been cheating on her. When she breaks up with him on-air, she finds her life in ruins and moves in with her little brother (Ryan Devlin) to put her life back together.

No, the film’s not about incest (sorry to burst your bubble), but every performance in Weather Girl is executed with a grace and feeling that’s hard to find in most blockbuster films these days. You also get a sense that these are more than just characters – they’re people you know, or wish you knew.

The film is written, with a great balance of love, snark and comedy, and although you probably don’t know his name yet, watch out for more films by writer/director Blayne Weaver; he’s done a great job here. OK, fine, so the storyline is a little old school, but you know what? It’s actually kind of refreshing, considering what the major studios are churning out right now.

In the end, Weather Girl is a fun, whirlwind ride through the ups and downs of being single, unemployed and searching, and it displays a real sense of what’s happening in popular culture today. It’s a great film, about real people and real experiences.


Weather Girl releases in select theaters July 10.
Article posted on 7/7/2009
This article has been viewed 5206 times.