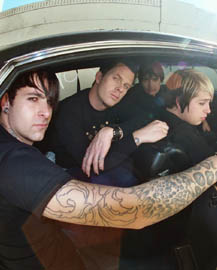 The members of Bleed The Dream have faced their share of adversity. When he was a mere 15 years old, singer Brandon Thomas found himself living on the streets of Baltimore, Md., the product of a broken home. Rescue for Thomas came in the form of a chance meeting with bassist Keith Thompson and guitarist Dave Aguilera as the three discovered a common passion; their love of creating music. All that the trio needed to make a go of it was a drummer – a call that was answered by Scott Gottlieb.

The four quickly became best friends, more like brothers, and were stunned at the news in 2004 that Gottlieb had leukemia. In and out of hospitals for over a year, Gottlieb continued his work with the band and finished up the drum parts for the group’s debut album, Built by Blood (Warcon). He beat the skins relentlessly, in a way symbolic of his battle with his cancer. But an infection crept its way into Gottlieb’s lungs, and on April 10 he succumbed to the disease.

To honor Gottlieb and to keep themselves from going crazy, the remaining members have decided to carry on with Bleed The Dream. Guitarist Dave Aguilera struggles to find the right words, barely a week after Gottlieb’s death.

Although Gottlieb’s illness was very serious, the band never really considered the possibility that he would one day not be around.

"We just wanted to get bigger and bigger, to give him something better to come back to," Aguilera explains. "We definitely wanted to keep everything positive. We didn’t want to say, ‘What if?’ That phrase just didn’t exist."

Bleed The Dream has managed to meld that positive attitude into their work ethic, having already slogged their way through two Vans Warped Tours as an unsigned band. Now the band has the backing of Warcon Records, the label co-founded by Warped creator Kevin Lyman.

Aguilera says that, "Warcon is not like a corporate thing. It’s more like a family thing; it feels like an indie label. Kevin Lyman was at Scott’s funeral. The owner of the label came to the funeral!"

Lyman also has given the band a full slate on this year’s tour, where Aaron Edmonds will sit in on drums. Aguilera indicates that the band has things in place to make sure that Gottlieb’s family gets the money that the late drummer would have earned from the record and tour.

Every mile on the road will be especially tough for Bleed The Dream this year. The band has decided that one of Built by Blood’s songs, "Broken Wings," will not be played for awhile. The song was written for Gottlieb.

"I don’t think we’ll ever write another song about him, but I think of him constantly when I’m writing," says Aguilera.

The guitarist says that Gottlieb’s sense of humor will also be missed.

"He had this way of finding a funny situation out of nothing. You’d have to get to know him to understand his sense of humor. He was kind of a quiet guy if you didn’t know him."

The band has also decided that they will be involved in raising funds for cancer research on an ongoing basis.

"That’s what he would want and that’s what we want," says Aguilera. "We’re going to try and help out some kids who’ve got cancer. We know we’re not going to find the cure for cancer, but if we can just help out a couple [people], that would be awesome!"

Built by Blood is currently available. Bleed The Dream will play two shows at Chain Reaction in Anaheim on May 27 and 28. The band will also play the Vans Warped Tour ’05, which kicks off in June. For more information, visit www.bleedthedream.com.