The Higher: It’s Only Natural 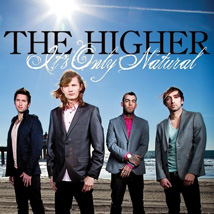 The Higher bill themselves as a combination of pop, rock, R&B and hormones, but this Las Vegas band sounds more like a combination of the Jonas Brothers and Story of the Year, with a touch of New Found Glory. The songs are pretty catchy and polished, but this is something that could have been produced by those who worked with any given ’90s-era boy band.

Actually, it’s kind of a nice blast from the past, except that all the tracks on It’s Only Natural (with the exception of their cover of Ne-Yo’s “Closer”) are the Higher originals. Their music is not bad, it’s just pre-packaged power pop.

There are a few moments of awesome guitar riffs (“Story of a Man Obsessed”) and lots of undeniably dance-y moments (“The Black Dress”) backed by good vocals, and all of this makes a very likeable, listenable album, but it’s not particularly deep.

It’s Only Natural is currently available.