The Unborn, The Foot Fist Way and More 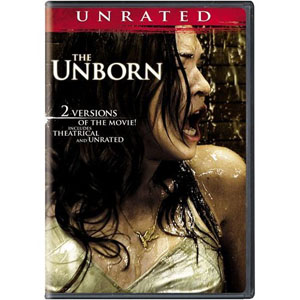 The Dark Knight co-screenwriter David S. Goyer gave birth to The Unborn, an only partially developed ghost story. Odette Yustman stars as a woman haunted by a demonic ghost boy. Gary Oldman appears as a priest to perform an exorcism, but he can’t save this formulaic mess.

To look at her you wouldn’t think Drew Barrymore was Hollywood royalty, but she comes from a long line of iconic screen actors dating back to the silent era.

The John Barrymore Collection highlights a few of grandpa’s films from the ’20s. The diverse set includes: Tempest, a Russian revolution-era romance, The Beloved Rogue, a swashbuckler, Sherlock Holmes and one of the best versions of Dr. Jekyll and Mr. Hyde. The latter disc also contains a short parody starring Stan Laurel.

Sure we’ve all seen the Halloween and Christmas specials a hundred times, but now we can see all six of the Peanuts shorts produced during the ’60s for the first time on DVD in the Peanuts: 1960’s Collection. These include: Charlie Brown’s All-Stars, He’s Your Dog, Charlie Brown, It was a Short Summer, Charlie Brown and You’re In Love, Charlie Brown. Also included is a featurette on Vince Guaraldi, genius composer behind the infectious “Linus and Lucy.”

Jody Hill and Danny McBride, the team behind The Foot Fist Way, created HBO’s “Eastbound & Down.” (The Complete First Season is available now). McBride, the redneck Will Ferrell, stars as a washed up major league pitcher who returns to his small Southern town to teach gym class. Fans of McBride’s one-note egomaniac persona should enjoy it. Ferrell also guest stars in a couple episodes.

“Mystery Science Theater 3000” returns with the latest batch of schlock in Vol. XV. The masters of sarcasm take on the cinematic masterpieces: The Robot vs. The Aztec Mummy, The Girl in Lovers Lane, Racket Girls and the pièce de résistance, Zombie Nightmare, starring Adam West and Tia Carrere. The episodes are nicely divided between the Joel and Mike eras.

Former “SNL” cast member Molly Shannon stars alongside Selma Blair in “Kath & Kim.” The adaptation of the Australian hit follows a self-absorbed fashion-challenged mother and daughter as they set out to conquer suburbia. Shannon is pitch perfect, but the casting of non-comedian Blair is baffling. John Michael Higgins of the Christopher Guest troop co-stars and plenty of “SNL” alums crop up along the way. But the show is too one-note, with no straight man to play off of. (Season One is available now.)

“Samurai Champloo” is one of the most entertaining, vibrant anime series in some time. The story follows two ronin, one a disciplined master swordsman, the other a young, flashy upstart – both deadly with a blade. When the local restaurant is destroyed the waitress hires the two wandering samurai to help her on a mission. The show manages to be stylish without being annoying, imitating handheld camera zooms in action scenes, using hip-hop music and visceral editing. The Complete Collection box set is now available.

Two full-length films come to DVD: The Conqueror of Shamballa, the feature-length spin off of “Fullmetal Alchemist” and Blade of the Phantom Master, about the last warrior of a secret army protecting a fallen empire from zombies.

Kiss and Tail: The Hollywood Jump Off interviews the very people written about in Karrine “Superhead” Steffans’ best-selling books (including Confessions of a Video Vixen) as well as those that apparently know her well. Ja Rule, Darius McCrary and others share their opinions of her, while various industry people weigh in on the video girl phenomenon in general. Steffans even jumps in to defend her actions. Narrated by shock jock Wendy Williams, Kiss and Tail highlights a depressing, but real, part of the hip-hop scene. –Jessica Koslow