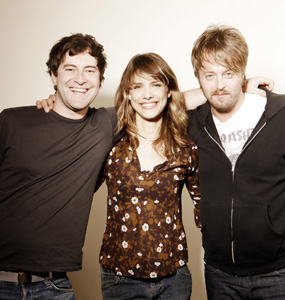 Is it possible to do something so gay that is makes you straighter? That’s one of the central questions in Humpday, Lynn Shelton’s film about two decidedly heterosexual buddies playing a game of sexual chicken.

They’re Bromosexuals making Bro-Porn. Now that’s how you say, “I love you, man.”

Shelton says the film’s genesis came from her desire to work with Duplass (The Puffy Chair, Baghead). She approached him with the offer to “custom design a role.” When she explained her idea about “the extremities of straightness,” he jumped at the chance and suggested Leonard (The Blair Witch Project) for the other part. Together, the actors and director created what Duplass describes as “a rock solid outline” for the film, which was entirely improvised in exhaustive 20-40 minute takes (on digital video, of course) and shot in just 10 days.

It’s thanks to Shelton’s navigation and guidance that the film succeeds according to Leonard, who admits, “This whole thing is filled with traps. It could have gone bad so easily.”

Using the classic formula of first pet’s name and street you grew up on, Duplass proudly announces he’s Speedy Le Bar, but Johnson is quick to steal his thunder.

“As the gods would have it,” Leonard decrees, “I am Cheetah Saxton!”