Jet Li: Actor and Martial Arts Star Unleashes His Softer Side with Unleashed 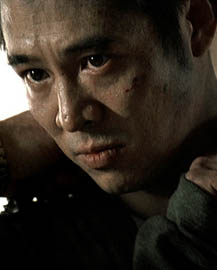 When one thinks of Asian superstars, two names come to mind: Jackie Chan and Jet Li. But while Jackie Chan has worked consistently to be more than "that Asian guy who can do cool flips," Jet Li has been stuck in the martial arts genre since his American film debut in Lethal Weapon 4. Hopefully, though, all that is about to change.

With Focus Features’ Unleashed, Li takes on a different type of action movie. The film focuses on Danny (played by Li), a man raised like an attack dog rather than a human. Trained to kill on command, Danny has gone virtually his entire life without any sort of normal human education. When his owner (Bob Hoskins) is shot, Danny enters a world he’s never known – a world filled with compassion, respect and love – when he’s taken in by a blind piano tuner named Sam (played brilliantly by Oscar-winner Morgan Freeman).

Despite the intense and graphic action sequences, Li believes Unleashed will show Hollywood that he can do more than just action films – he can act, too.

"I’ve never played this role before," Li states. "This isn’t your typical action film. I met with my acting coach two months before shooting to help me forget who Jet Li is. I had to get inside of Danny and know what he was thinking. We would visit the dog pound and I would look into their eyes and study their reactions. Then on set I had to ask, ‘Are you really Danny?’ I was surrounded by great actors who helped make me believe I was Danny."

For Li, each American film is an attempt for him to branch out into Hollywood and prove he can take on other genres. With Unleashed, Li gets to show a more dramatic side than viewers are used to seeing when he becomes a part of Sam’s family. Viewers get to see Li not only change mentally as he becomes accustomed to his new human world, but also emotionally as he becomes attached to his new family. This storyline, Li believes, not only helps showcase him as an actor, but also helped the film escape a harsher rating due to its extremely violent action scenes.

"The rating wasn’t a problem because, although there is a lot of violence in the beginning, [the moral of] the story is that love is more powerful than violence," he says. "Violence isn’t the only solution. It is if you are an animal, but we are humans."

Working alongside the great Morgan Freeman, Li also got a chance to witness firsthand how one of Hollywood’s A-list actors works. Li – who has been attached to Unleashed alongside writer Luc Besson for three years – recalls how Freeman joined the cast.

"The role of Sam was always based on music, and when it was decided he would be a piano tuner Besson said, ‘What about Morgan Freeman?’ My manager, who is also a producer on the film, thought it was a good idea.

"It wasn’t until two days before shooting began, though, that Morgan decided to play it blind," Li continues. "He said, ‘Blind is better.’ We just trusted him."

Trust plays a big part in making any Jet Li film. To avoid getting killed, Li must trust his co-workers and crew as much as he trusts himself. Although he’s proven himself to be a great stuntman (Li began his career as an action star when he was only 17), as Li’s popularity grows among American audiences, so does his paycheck. This makes directors and studios a bit more hesitant to let the star of their films do all his own stunts.

"It’s not just the studio and the director, it’s also the insurance companies," Li states. "They don’t want to cover me if I get hurt. They don’t even want to cover the stuntmen."

Luckily for them, there were no accidents on the Unleashed set, although Li says, "Everyone got hurt."

While onscreen, Li typically uses martial arts to kick everyone else’s butts. In real life, though, he says that martial arts should only be practiced for one of four reasons: as a form of self-defense, to become more athletic, as a form of entertainment (i.e. movies) or for health reasons. When asked what reason attracted him to martial arts as a kid, he replies with none of the above.

"I was 8, so I knew nothing about martial arts," Li recalls. "My father died when I was 2, and my Mom always had a big heart. I would do anything to show her I was a good son. I wanted to make her proud. My coach said, ‘Martial arts.’"

What started out as a hobby to merely make Mom proud quickly became Li’s namesake, so one has to wonder why he’s so eager to leave behind the genre of storytelling that’s made him famous. While Li is already at work on another film in China, he’s keeping his fingers crossed that Unleashed will help him establish both facets of his personality with American audiences: Jet Li the action hero and Jet Li the Hollywood actor.

"But while I may want to do a comedy, right now it’s not for the studio," he continues. "The studio wants what the fans want, and fans want Jet Li action movies. If the fans start to believe I can do drama or comedy, then the studio will offer me a drama or comedy. To say, ‘I want to do a comedy’ is just a daydream. Hopefully when fans see this movie they will see my heart went into making this film and that I can do more than just action."

For now, though, Li can only wait to see what the public’s response to his softer side will be.

Unleashed releases in theaters May 13.