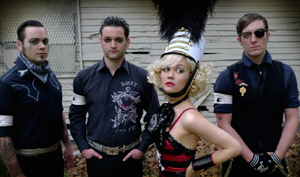 A group of corset-clad bombshells stand together inside a sunlit ivory room, sneering while showing off their pearls and garter belts. A petite blonde adorned with rhinestones and a single black teardrop near her made-up eye warns potential suitors to run away or risk having a broken heart.

The glamorous bad girl sings a cautionary tale of falling for the wrong broad with feminine-yet-raspy vocals, channeling classic ’50s girl groups with a Prohibition attitude. While some may fear her gang of outlaws, known as her male-dominated band, we can’t get enough … and that’s just what listeners find in Miss Derringer’s video for “Better Run Away From Me,” the single from their 2006 sophomore album, Lullabies.

However, leave it up to vocalist Liz McGrath and her army of rebels to continue serving audiences dreamy, yet broody lyrics of razorblades and heartbreak, retro surf pop fusing with teenage tragedy melodies and some mean rock ’n’ roll. Miss Derringer is back with their latest album, Winter Hill, and we couldn’t be more thankful.

“I was reading Wikipedia, and I came across this Winter Hill gang war that happened in the early ’60s,” explains guitarist Morgan Slade. “One mob leader made a pass at another gang member’s girlfriend and then a whole battle started in Boston.”

It was this discovery that led to Miss Derringer’s inspiration behind their latest creation. The Los Angeles-based band, which formed in 2004, reinvented their often somber, Southern songs for something more dangerous. The result is, according to Slade, “the soundtrack of a 1960s Irish mob war.”

With tracks like “Click Click (Bang, Bang),” “Bulletproof Heart,” (with drums by Blondie’s Clem Burke) and “Black Tears,” listeners will travel to a world of smooth-talking mobsters, sassy beauty queens and irresistible pop songs that easily manage to keep anyone swiveling their hips, while reminiscing of the one that did them wrong.

Winter Hill is a throwback melodrama, a sound rarely found in today’s Lil Wayne/Lady Gaga era. With artists like Christina Aguilera and Amy Winehouse capturing a wider audience with retro beats, it’s no wonder that Miss Derringer is gaining popularity.

“I think there will always be some people nostalgic for things from the past,” states Slade. “There’s so many records of things from the ’20s, ’30s and beyond that people are now beginning to discover a lot of cool stuff from these eras and applying them today.”

As all things vintage continue to rule pop culture, Miss Derringer is shamelessly stirring things up in the L.A. music scene. Despite Orange County being the epicenter for rockabilly, Miss Derringer received a rude awakening for being different. While touring alongside legendary punk band Bad Religion, hardcore fans heckled the group. Fortunately, the experience hasn’t fazed them.

“We like Bad Religion, and it’s always a great experience to perform with a band you’ve admired for a really long time,” states Slade. “These were super die-hard fans who just wanted to see Bad Religion, and they were ready to boo almost anyone. So when they saw a group of guys with eyeliner, you could only imagine how they reacted. It was a good experience for us because after being booed by 200 skinheads, we’re really not worrying about anything.”

As the band continues to tour the country with Girl In A Coma, McGrath, the band’s leading lady and Slade’s wife, encourages listeners to discover their own summer soundtrack in Winter Hill.

“I know there are certain records that take me back in time,” she says. “I hope we can achieve something like that.”

Whether dramatic tales of woe get you hot and bothered, or you’re looking for a musical collection to satisfy your own angst, Miss Derringer and their latest album are a blast from the past that won’t go out of style.