Our Lady Peace: Feel the Burn 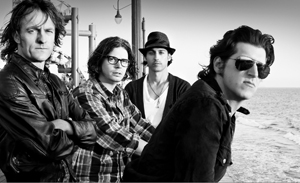 After more than five million albums sold worldwide and years punctuated by four Juno awards and 10 MuchMusic Video Awards, there is no doubt that Our Lady Peace is one of Canada’s most celebrated exports.

“Our uniqueness lies in the fact that throughout our career, we have never fit into a specific genre. We are comfortable with this distinction,” vocalist and co-founder Raine Maida says.

Emerging in the alternative rock music industry more than a decade ago, their career started with the release of a breakthrough debut album, Naveed, which catapulted them to fame. With hard driving rock songs and an original sound and style, the album surpassed platinum sales in a short amount of time.

The band attempts to recapture their first album’s raw live energy with their seventh studio album, Burn Burn. By maintaining spontaneity and refraining from needless investigating and overanalyzing of the songs, the album boasts “some of the most special and rewarding pieces of music the band has ever put to tape,” says Maida. Set to release July 21, he calls the album “a proper rock record.”

These creative and professional luxuries were afforded because of the band’s decision to produce the album independent of outside collaboration for the first time. Maida, with more than five years of experience as a music engineer and producer, took charge.

“What was different this time for OLP was having the opportunity to trust our instincts 100 percent by choosing not to collaborate with a producer. It was time we challenged ourselves this way, and it paid off in terms of Burn Burn being the most concise and uncompromised OLP record to date,” says Maida.

“A poet experiences the same thing through their words on paper, a painter through the canvas and a musician through song. It is a tangible part of my life that someone will be able to experience when I’m gone,” he shares.

Their first single “All You Did Was Save My Life,” featuring Shenae Grimes of “90210” fame, peaked at No. 12 on the Canadian Hot 100. The song is currently circulating on U.S. radio nationwide.

Although this album marks the longest gap between OLP studio albums to date, it actually took the shortest amount of time to record.

“The misconception that it took so long was because we did it in seven-day sessions scattered over 18 months. We had got together six or seven times for a week or so, and a record was miraculously done,” Maida says.

In support of their upcoming album release, the band recently kicked off a two-month summer U.S. tour.

“We have taken a whole new approach to our live show,” says Maida.

Besides adding light panels to create dimension to the show, the band is going to include several older songs that had been neglected over the years. Most importantly, the music will be stripped down, raw and dynamic.

“The band has never felt more confident and energized as we do at this moment,” says Maida.

Burn Burn will be available July 21. Our Lady Peace will perform July 28 at the Troubadour. For more information, visit ourladypeace.net.