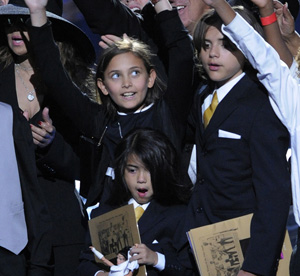 As I was getting ready for the day’s festivities, I had a lump in my throat. On one hand I was excited to be able to take part in a historical event the likes of which we’ll probably never see again, but on the other hand I wished it wasn’t at the expense of Michael Jackson’s life.

A true entertainer in every sense of the word, a humanitarian and a musical genius, Jackson’s heartfelt reach extended around the world. It’s difficult to capture in words the effect that MJ has had on me. Off the Wall and Thriller were the soundtracks of my childhood.

Today was meant to be a celebration of this extraordinary talent’s time here on Earth, and while the memorial was indeed that, it was also a stunning reminder that Jackson was also a father, a brother and a son. The memorial was filled with condolences from the likes of Diana Ross, and performers like Mariah Carey and John Mayer paying their tributes through Jackson’s songs.

But what made the celebration intimate were the stories. For a few brief moments, we were able to catch a glimpse of who Michael Jackson truly was – a loving, positive individual.

Listening to Berry Gordy recall his initial thoughts when meeting Jackson, Magic Johnson’s funny story of eating fried chicken with MJ and Brooke Shields’ openness about one of her best friends – it was almost like a family gathering. One of the most touching moments of the two-hour ceremony was Reverend Sharpton’s eulogy, the musical walk down memory lane with Stevie Wonder and seeing a very pregnant, radiant Jennifer Hudson sing the apropos “Will You Be There?” What a pillar of strength she is after all she’s been through.

I hope that Jackson’s children are able to find comfort in the fact that their dad was well loved and that his love will continue with them for the rest of their lives.

After the memorial, the legions of attendees poured out of the Staples Center and Nokia Theatre with gold program books in hand. I wish that I was able to grab one, but just being there to show support and pay my respects was enough.

What will always remain is the music. Rest in peace, Michael Jackson.