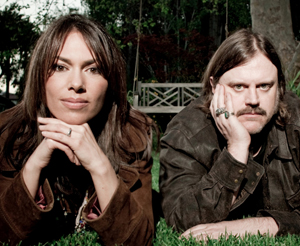 Get Under the Covers with Susanna Hoffs and Matthew Sweet, a.k.a. Susie and Sid.

Sid and Susie Under the Covers

Matthew Sweet and former Bangles singer Susanna Hoffs, a.k.a. Sid and Susie, are about to release Under the Covers Vol. 2, a compilation featuring their take on 16 big pop hits by artists like Fleetwood Mac (“Second Hand News”), the Raspberries (“Go All The Way”), Rod Stewart (“Maggie May”) and Todd Rundgren (“Hello It’s Me”). The album drops on July 21, and you can hear the songs performed live that same night when the duo appears at the Grammy Museum.

Are You the King of Blues Guitar?

The Guitar Center has launched their latest talent search, and this time out the folks behind the Drum-Off and On-Stage competitions are looking for the country’s greatest undiscovered blues guitarist. Interested parties can enter the King of the Blues contest by being one of the first 30 registrants at any of Guitar Center’s 214 locations nationwide.

In the preliminary round contestants can perform with their six, seven or 12-string acoustic or electric guitar, lap steel or pedal steel and can use any audio pedal effects that can be set up in five minutes. Guitar Center will provide the amps and a selection of backing tracks that can be downloaded in advance.

Some exciting new music is being featured where you would least expect to hear it: on talk radio. Eighteen up-and-coming artists are getting airtime on the Your Mental Health Talk Radio show that airs at blogtalkradio.com.

The program is hosted by Jacqueline Foreman, who explains why a mental health show would be featuring musicians.

“After the death of my son in January 2000 only three things helped to pull me out of the deepest, darkest depression I have ever known: prayer, meditation and music. Music has the ability to heal so many things including depression, bereavement, anxiety and a host of other disorders.”

The list of artists appearing had not been released at press time, but among them will be Tyka Nelson, the sister of none other than Prince. The show airs daily at 10:30 p.m. and is also archived should you miss an episode.

Fearless Records is offering their 2009 Summer Sampler for free download through their MySpace page. The seven-song set includes new music from Sparks the Rescue, Artist Vs. Poet, Eye Alaska and A Skylit Drive along with otherwise unreleased tunes from Breathe Carolina, the Word Alive and Lets Get It. Fearless is also planning on giving away exclusive prizes in conjunction with Warped Tour, but you’ll have to become a MySpace friend to be eligible for those.

Grab your crayons and get ready for the Indie Rock Coloring Book, an Andy J. Miller-designed ready-for-coloring homage to groups like the Shins, Yeah Yeah Yeahs, Rilo Kiley, Andrew Bird, the New Pornographers, MGMT and many others. The coloring book is being released through Chronicle Books, and all royalties will go to the Yellow Bird Project, an organization that puts artists and musicians to work to help out charities.

The coloring book comes out in September, and some of the bands involved will also be designing special T-shirts to benefit charity. Details at yellowbirdproject.com.