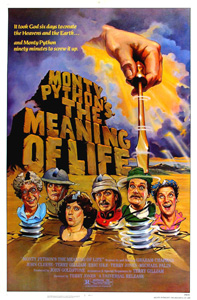 British comedy troupe Monty Python is to comedy what Mel Brooks is to Judaism, what the Lonely Island is for frat boys and what “Tim and Eric” is to absurdity combined. Their initial venture, “Monty Python’s Flying Circus” (which ran on BBC from 1969 to 1974), won over audiences with its nonsensical sketch premises, elongated cold opens and “South Park”-inspiring, stop-motion collage animations.

Their career path from sketch comedy into mainstream success was unheard of at the time, but everyone from Adam Sandler to Broken Lizard (Super Troopers) has since followed in their footsteps, signing record deals for funny tunes and releasing full-length films to an international audience. The original splendor of turn-of-the-’70s British humor lives on through their five released movies and, since 2004, a Broadway musical based off their most famous flick, Monty Python and the Holy Grail.

To kick off the first week of the “lovingly ripped off” “Spamalot”’s two-month stop at the Ahmanson Theatre, the American Cinematheque is hosting a Thursday night double feature of Monty Python’s best work. Filled with more silly jokes and surreal comedy than modern stoner humor can offer, 1983’s Monty Python’s The Meaning of Life and 1975’s Holy Grail showcase the troupe’s two best sides.

Holy Grail is a parody on the story of King Arthur, filmed in Scotland and filled with one-liners. With its breakings of the fourth wall and absurd plot twists, it took from parodies before it (Casino Royale came out in ’67) and also laid the groundwork for every parody made after it (Technically, the British invented Scary Movie.).

The Meaning of Life, however, their last film, is the darkest of all five. A smattering of skits filled with more violence, black humor and mentions of death than before, the Monty Python-ites return to their original sketch comedy format and in not so many words, tell us we’re all screwed (also see cover art).

So, if the meaning of life is nothing, then why not fill it with silliness? The movies are playing in reverse chronological order, which makes so little sense that it almost makes perfect sense (and then catch “Spamalot” before it heads to Tucson).