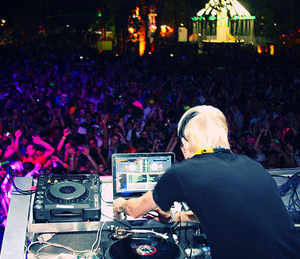 Over 100,000 music lovers united under the sun and stars for 2009’s Electric Daisy Carnival, a party that continues to one-up itself every year. The nation’s largest dance festival doubled in size, spanning two full days for the first time. Once again the gala took over the grounds of Expo Park and the Coliseum with five stages, over 70 artists, fireworks and tons of carnival rides.

The momentum shifted into high gear Saturday with an onslaught of talent from around the globe. Legendary Groove Armada sent the thousands of bodies within the Coliseum into utter bliss with their mind-numbing DJ set. In addition, Simian Mobile Disco, the Crystal Method, Roger Sanchez, PVD, Infected Mushroom, Diplo and Kaskade all left their mark on the crowd with top-notch performances.