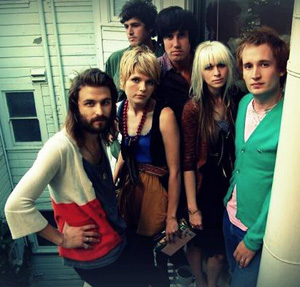 It all began on a Monday. That’s when six of indie rock’s most talented sons and daughters set foot onstage at Spaceland for a month-long residency. Castledoor had one mission: to beguile every person in its wake. I think it’s safe to say, mission: accomplished.

Led by vocalist Nate Cole, the band played a fine mix of its past and present hits. The rest of Castledoor, consisting of Cole’s wife and keyboard/synth-player Liska, co-founder and guitarist Gabe Combs and his wife keyboard/synth-player Coury Combs, bassist Brandon “Brando” Schwartzel and (hot) drummer Joel Plotnik NEVER disappointed providing a vibrant musical canvas for their charismatic frontman.

Perhaps one of the biggest fan moments of their month of Mondays was when the group performed its cover of James Brown’s “It’s a Man’s Man’s Man’s World.” Call it hyperbole, but Cole tore up that stage with his rousing mix of strut and soulful angst.

The final show was not without its amusements, either. Castledoor allowed – shall we say – a zealous fan named Craig to take the stage and join in during the song “Fifth Tambourine.” Also contributing added spice was guest vocalist Robert Schwartzman of Rooney (who produced Castledoor’s latest release, Shouting at Mountains).

Unlike most residencies that I’ve seen over the years, Castledoor’s will always stick out in my mind because of the vibe it managed to capture. Strangers forged friendships and began to meet up at the venue to support the band. We yelled and clapped and cheered on these performances. My week became predicated around Monday nights.