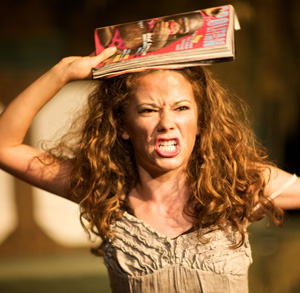 Squeezed into the treehouse-sized Powerhouse Theatre in Santa Monica is writer-director Daisuke Tsuji’s collaboration with the Los Angeles Theater Ensemble. It’s a play stuck on fast-forward: it has to be. To get through Tsuji’s twice-warmed social commentaries and undercooked grand ideas of personal identity, the characters – monkeys, apes, a human – crash from one satire into another about war, college, capitalist consumerism, sex, love, politics; from poo-eating to lessons in emotion. Think of a Tudor morality play for a 21st century that knows Darwinism is religion and commerce is high culture.

“Monkey Madness” is a big didactic stick hitting you over the head, which literally is what Tsuji demonstrates on an audience member before the house lights dim. He’ll hit someone with a baton. It won’t hurt, but it won’t tickle.

As caricatures of Homo sapiens, the monkeys chase after illusions and ideas which no one but they have put in their heads, and the bestial expresses itself more absurdly and violently for the chasing, without them realizing it. In this fable, figuring out which way is upward evolution and which is retrograde depravity are confusions in which Tsuji lets you soak. His players don’t discover the differences either.

The LATE has made corrective decisions by surrounding the writing with talent that works in spite of it. Jim Sudik’s scene design has superb economy. Working within a tight square, the set is as porous and tricky as Swiss cheese. Miles Taber (masks) and Priscilla Watson (costumes) use paint and chic “Crusoe” designs to dress the monkeys as indigenous islanders, and with a modified WWI gasmask they make the human into an alien, metaphorical creature. Cristina Bercovitz’s puppetry takes us from shadowboxes to a globular white ape fetus to something much bigger, much more threatening at the end. Jonathan Snipes has poured darkness and troubling divine echoes into the voices of Bercovitz’s puppets, and their work is reason enough to give $15 to the Powerhouse.

You won’t notice Francois-Pierre Couture’s light design, a good thing, because it works in service of the production; it’s understated.

Dee Sudik as the Monkey Say takes her jaw, wrists and knuckles seriously. She’s a stage veteran, but she carries more verve in her joints than the kids aping around her.

Randy Thompson lets us see the awful ambition that underlies Monkey Boy’s dissatisfaction. But Olivia Choate is caught in the paradox of playing a role, Human Girl, that shouldn’t have been written (given an already crowded cast), with too few lines to prove herself. She’s there for the message of the play, as if there weren’t message enough every minute for its two hour length.