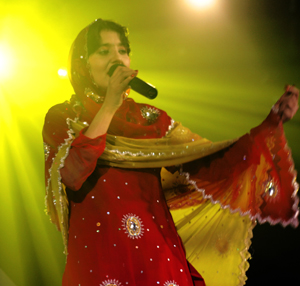 What greater social equality can you imagine than the power to text message a vote for your favorite singer? In Afghanistan, a trivial right Americans take entirely for granted becomes the basis of their new world order and a wealth of opportunity. Journalist and filmmaker Havana Marking’s new documentary, Afghan Star, named after the monumentally popular “American Idol”-esque show the film delves into, is a shocking and moving piece about the tested limits of democracy, newfound freedom, nationalism and the tipping point of egalitarianism.

For almost three decades, Afghanistan has been in a constant onslaught of civil war and Taliban rule. In 1996, they declared music sacrilegious, and soon it was illegal to listen to music, watch TV, own a computer or even dance. Those brazen enough to disobey were murdered for their insubordination.

The Taliban’s rule fell in 2001, and in 2004, those limits were lifted after a democratic election that installed a new government. After years of repression, Afghanistan soon saw their first televised talent competition, “Afghan Star,” a show viewed, adored and voted on by over one third of the country.

Beyond entertainment, the show offered its audience the power to vote, giving them their first real taste of implemented democracy, and showcased an unprecedented mix of three women and all of the country’s ethnic groups. A national phenomenon was instantly born.

Throw away any blithe thoughts that this might be a Middle Eastern Footloose. Set against the backdrop of a ravaged country where the Taliban still lingers and religious zealotry is rampant, there are no easy answers in Afghan Star. The one unabashed soul who does dare to dance on national television soon receives death threats.

While the documentary follows four of the show’s contestants, it’s less about the singers’ journeys and more about the implications of a nation’s untested advances on liberty. While one minute you find yourself cheering Afghanistan’s new national unity, the next you’re hit with the jarring reality that these contestants are actually risking their lives for the chance to sing.