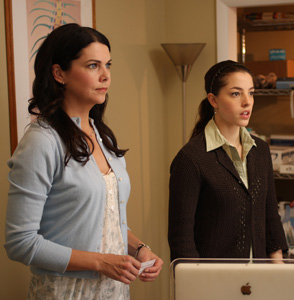 What would you do if you had inadvertently created an international spiritual movement from which you could not escape? That’s the problem facing Arlen Faber in The Answer Man.

Arlen (played by Jeff Daniels) is the author of the fictitious literary juggernaut Me and God. This book is about his personal convos with God in which he receives answers to every important question plaguing mankind.

Although Me and God (and its many hilarious spin-off publications) was written nearly 20 years ago, it’s made a superstar of its author. You’d think in this world of Deepak Chopra and Dr. Phil that this would make the author happy, right? Think again.

Arlen is a surly recluse who, on most days, refuses to leave his house. His relationship with his book editor (Nora Dunn) is on shaky ground. He’s so over the success and the attention that his work has produced that he’s turned on his adoring public.

Arlen would sooner dropkick an old lady than engage a fan in a Q&A about the big guy upstairs. All his anger and frustration has taken its toll on him physically, as well.

He’s developed a bad back.

Arlen winds up in the office of a lovely chiropractor (Lauren Graham, “Gilmore Girls”). Not only does she fix his spine, but she ignites his romantic passions as well. The two help each other with their respective issues and even do a good job keeping a young recovering addict named Kris (played by Thumbsucker’s Lou Taylor Pucci) on the right track.

There have been a lot of movies released so far this year, but none have been as pleasantly surprising as The Answer Man. I knew little to nothing about this film before seeing it, and it really blew me away.

There is such a smart undercurrent of philosophy running in this movie. Many of the Answer Man’s explanations of how the world works are so inventive they make Oprah sound like some tweaked-out sorority chick.

I also enjoyed the subtle and dry humor in the movie. It’s pitch-perfect for moviegoers of any age. So is the cast. Young and seasoned Hollywood collide within the well-rounded cast (Juno’s Olivia Thirlby as well as Kat Dennings from Nick & Norah’s Infinite Playlist co-star.).

Toward the middle-end of the movie, things meander a bit. But that’s pretty much the only criticism I can give to the film. It’s a great summer comedy for people who still dare to question the world around them.