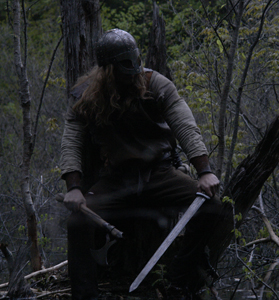 Just when I was thinking ‘what the world needs right now is another film that gives Vikings a bad name,’ along comes Severed Ways to sate that desire. Filmed on director Tony Stone’s family property in Vermont, the film’s main redeeming points are its lush landscapes and Stone’s attention to detail, which at times results in an authentic experience and at others draws comparisons to geekish LARP enthusiasts.

Severed Ways follows two Vikings, Orn (Stone) and Volnard (Fiore Tedesco), believed to have been killed during a failed battle with the Skraeling (Norse for the Native American Abenaki tribe) and abandoned by their party of Vinland-seeking explorers.

Stone obsesses over the rigors of survival rather than building strong dialogue and plot. Indeed the dialogue, in Old Norse, is sparse and often hysterically interpreted via subtitles (the fish they eat is “killer,” and they better get out of there, or they’re “toast”).

Eventually they stumble upon two Irish monks, escaped thralls (slaves) who have assembled a crude church. Something of an anti-Christian subplot emerges early on via Volnard’s flashbacks to his sister’s conversion, so the two furiously pounce upon the monks. They burn the church, perhaps a nod to Burzum, one Norwegian dark metal band who appear on the soundtrack, lead by Varg Vikernes a.k.a. Lord Grishnackh, recently released after serving a sentence for burning churches and murdering his guitarist. Not someone I’d pay homage to.

Volnard spares one monk, leading to some awkward moments between the two backed by romantic music that bring the audience to believe that something much more than conversion might be on the agenda. Preferring the company of said monk, he leaves Orn who wanders until he is drugged and raped by a Skraeling woman.

When Orn slays the monk, Volnard battles against him, clearly his conversion has taken hold. Despite their rocky relationship, when Volnard meets his fate by Abenaki arrow, Orn avenges him and sends him off with a makeshift ship burial.

The epilogue finds Orn wandering exposed to the harsh winter elements where he at last perishes in the snow. You’d think that a Viking would possess better winter survival skills, but perhaps Orn has a death wish.

Unfortunately, there are too many glaring faults to leave even myself, an avid fan of Scandinavian culture, satisfied. I’m left instead with a series of questions: Must I really watch a Viking take a dump? Are the garish CGI graphics that break up the action into chapters necessary? And what’s with the inexplicable head-banging break that kicks off Chapter Two, aptly titled “Camp?”