Valerie Cruz: Uncovers the Story Between the Lines 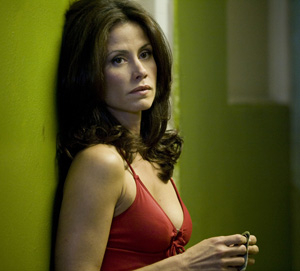 Valerie Cruz in The Line

She has worked with some of television’s hottest hunks, but there’s a reason Valerie Cruz is swooning for Ray Liotta.

“I grew up watching his movies,” the actress divulges. “He is part of the fabric of cinema. To be able to work with someone you grew up, not just watching but admiring, is exciting.”

Her newest indie feature, La Linea (The Line), will be released at the Maya Inaugural Indie Film Series in Los Angeles beginning July 17. In the film, Cruz is Olivia, a prostitute fighting personal demons for the sake of her daughter. Mark Shields (Liotta) is a veteran assassin trying to track down the elusive leader of Mexico’s Salazar Cartel, ‘Pelon’ (Esai Morales), the successor of an ailing Javier Salazar (Andy Garcia).

Similar to 2000’s Traffic, the film depicts a viciously dark, yet accurate, look at the battle for control of drug smuggling routes from Mexico to the United States known as La Linea (the Line). Shot on location in Tijuana, Mexico, the actors were forced to immerse themselves in a culture and population devastated by poverty and corruption.

“It’s a third-world country,” explains the Cuban actress. “There are homeless children in the streets, homeless animals. I had armed bodyguards outside my trailer. It was an experience that I’ll never forget.”

But in the end, Cruz’s natural story-telling ability and acting instinct have drawn her to this film for one reason: “It’s one of those movies that tells the story without feeling the need to tell it only in words. To me the most interesting things are what happen in between the lines rather than the actual lines themselves.”