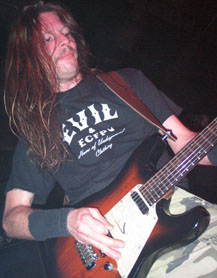 "Pure American Metal" say the back of Lamb of God hoodies on sale at the band's merch table. Who knows when this transfer of title from the bands of yesteryear happened? But one thing's for sure, Mötley Crüe and Poison they ain't.

Producing what is arguably the heaviest, most ear-bleedingly raw metal this side of recorded jackhammer sounds, Lamb of God's members have rightfully earned their spots as reigning kings of East Coast metal.

Dirty, sweaty and a drunken half-blur, Lamb of God’s live show embodies everything that’s fun about metal and has been throughout the ages. Though the use of Aqua Net has gone by the wayside, the basic principles and long hair have remained and are seen in their purest form in Lamb of God.

Uncensored, uninhibited and cursing like a sailor, frontman Randy Blythe made no hesitation to speak his mind on any number of topics in between songs, all the while interjecting bits of humble appreciation to the fans who reciprocated the band’s fervor.

“Whoever appeals to the law against his fellow man is either a fool or a coward. Whoever cannot take care of himself without that law is both,” started Blythe, saying the spoken word between-song bridge from their Ashes of the Wake album.

“For a wounded man shall say to his assailant, ‘If I live I will kill you, if I die you are forgiven.’ Such is the rule of honor,” yelled the crowd back at Blythe, finishing his lines for him as he smiled on, before the band launched into “Omerta.”

Blythe is undoubtedly the heart of the group when it comes to their live performance. He spends his time running from one end of the stage to the other, never standing still for more than a few seconds, frequently diving into the pit to screech face-to-face with his fans and occasionally showing a bit more of his backside than some dudes in the audience might care to see. Part playful and lighthearted while still bringing 100 percent raw, “kick your ass without a second thought” intensity, Blythe presents an odd, “lovable badass” dichotomy in his personality and stage presence.

Blythe’s vocals are a bipolar entity all their own. Part screeching cat getting skinned alive, part the voice of Satan himself, Blythe perfectly straddles the fence between making music that’s just “hard” and music that’s actually heavy.

As engaging as Blythe is as a performer, Lamb of God either failed or deliberately chose not to share the spotlight with him. Their musicianship does speak for itself, and each of the members show awe-inspiring individual talent while working as a cohesive unit, but standing in the shadows and hiding behind long, unwashed hair doesn’t help any.

Lamb of God played songs that spanned their musical oeuvre, but chose to stick a little closer to the newer Ashes material. As they played “Now You’ve Got Something to Die For,” the crowd took that as their signal to really go crazy, while bodies flew through the air, sweat poured out of the pit and a sea of flailing, moshing kids shouted along the chorus of the song on repeat. It was quite a sight to behold as the crowd swelled and exploded in perfect sync to what was happening on the stage.

Simply put, if you go to a Lamb of God show and are brave enough to venture into the pit, there is maybe a 50/50 chance you’ll come out alive. But damn if that wouldn’t be the most metal way to die …