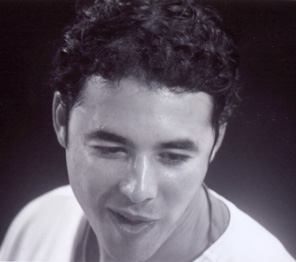 Andre Ethier is learning to live in the moment.
(Credit: Tim Rudnick)

A deep, long “om” reverberated over the sound system in left field at Dodger Stadium on July 18 as a capacity crowd of 100 participants sat on Dodger blue yoga mats for the first-ever “Yoga with Andre Ethier.” The event, a fundraiser inspired as a way to bring baseball closer to the lifestyles of women, featured the opportunity to meet the handsome right fielder while practicing a 10,000-year-old art form under the instruction of Ethier’s own personal yoga teacher, Johanna Epps.

Epps, an energetic young woman, sat on her mat between Ethier and team physical therapist Sue Falsone. It was perhaps a strange sight on a patch of grass otherwise known as Mannywood, yet it didn’t seem unnatural at all. Ethier expressed excitement at the opportunity to share with fans, in his own words, “… some of the intensity I bring to spring training.”

Training with Epps, Ethier was attracted by “something different.” He was not alone. Over spring training more than 20 players had showed up to a Sunday 6:30 a.m. yoga class in Glendale, Ariz. Participants included Chad Billingsley, Russell Martin and Manny Ramirez. In the past, such a team activity might have been met with jokes and barbs, but eyebrows are raised when that same team goes on to have the best record in baseball.

Ethier offered this about the practice: “You learn it’s not about competition. You have to concentrate a little more, and it takes perseverance. You got to sweat through your fatigue and keep going.”

It may seem odd that a big league baseball player whose professional life revolves around the competitiveness of the game should choose a practice that seeks the avoidance of competition, and yet there are surprising similarities between the two disciplines. Anyone who has observed the swing of Ramirez or even the daily fielding drills of ballplayers can grasp the importance of gracefulness. While baseball is a game of fits and starts, of sudden and quick movements, among the finest players these very moments are performed with remarkable elegance. It is the combination of grace, balance and poise that makes the play of baseball so beautiful to behold.

Secondly, there is the pacing of baseball. In any given nine-inning game, the ball is in play only about 10 minutes in the course of three hours. The game demands patience and sustained concentration, both of which are central to the practice of yoga.

As Epps guided the class in left field, she shared her own thoughts on the practice: “[In yoga] we are trying to get over being afraid. This is a chance to practice being still and patient through challenges.”

The game of baseball makes heroes because it presents ballplayers with supreme challenges, perhaps best exemplified in the at-bat. Pitcher and batter face-off, as the pitcher readies, a moment of intense concentration precedes the pitch.

Before thousands of fans and millions more watching on TV they are expected to triumph in this conflict, knowing there can be only one winner. What nerve! What Herculean courage the players must embody to put themselves in such a terrifying circumstance. And to do it everyday!

In his final remarks at the yoga gathering Ethier told the crowd that practicing yoga has helped him “live in the moment.” Spoken from a man who has consistently come through in the most clutch moments (Ethier has a team-high four walk-off hits this season.), we listen. In his next game following the July 18 class Ethier went 3-for-4.

So people can laugh if they like about big leaguers doing yoga, chanting “om” and sitting in lotus position, but results speak for themselves. Now if only the struggling pitching staff would give it a try.