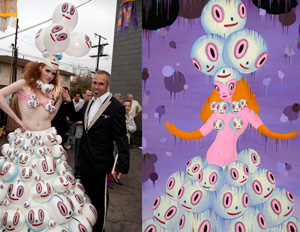 There’s always been a Carnivalesque quality to Gary Baseman’s creations – that blend of dreams only a child could conjure and phantasmagorical terror only an adult could comprehend: sacrificing yourself for love (a snowman who melts to save the mermaid of his dreams), the abuse of romance (Toby as piñata), the corruption by the woman (ChouChou, who takes away negative energy from girls and oozes out creamy love from his belly button). La Noche de la Fusión was the climax of Baseman’s work; creating in paint, vinyl, paper, for TV, film, magazines, board games, his creatures always yearned to transcend the boundaries their mediums imposed. At the festival, there was a bonfire where attendees could place their fears to be incinerated – Baseman’s superego was placed in beforehand, as the event was pure, blissful, id.

Art, like life, should be celebrated: Fusión took over the Corey Helford Gallery, and the adjacent parking lot, turning it into a sideshow of artistic expression: ring-tosses onto Baseman’s horned devil Hot Cha Cha, pan-cultural salsa-inspired music, Carnivale Girls – dressed in barely-there realizations of some of the artist’s most memorable paintings – and everything else a fete requires: popcorn, drinks, ice-cream, pictures, all Basemanesque.

Unlike many L.A. artists who seem comfortable resting on their stylistic laurels – putting their signature creations in new situations and selling giclées for $300 – these hangings revealed an evolution of the artist. For the first time, Baseman took found ephemera – vintage books acquired on recent exhibitions in Israel, Russia, Japan, China – and rendered often ironic images upon them.

A Chou wallows in his spilled love juice on a page from the 1920s book Sex Knowledge For Men. Hickey Bat Girl flaunts her wings across a Hebrew joke book that looks like a torn page from the Torah. Could be, as the most sought after pieces of the evening were Chou heads painted on the covers of My Golden Book About God.

Everything in Baseman’s world has the possibility to corrupt or inspire, drain or invigorate. Do all the above – lanterns, masks and other artwork created for the carnival is finally being released by the man behind the masquerade at garybaseman.com.

Art
Homeless artist wants to ‘be the light’ on LA’s skid row
1,355 views

Art
Muralist Robert Vargas is painting a towering history of LA above the traffic
5,231 views
bid=||