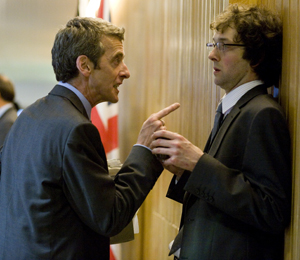 In the Loop is a movie so British, in the beginning, it’s almost like watching a foreign film without subtitles. But, much like Trainspotting, The Full Monty or In Bruges, eventually the ear acclimates and you find yourself utterly sucked in.

Perhaps it’s that accent and the American expectation of British class which allows characters like political spin doctor Malcolm Tucker (Peter Capaldi) to spew some of the most hilariously vulgar lines ever uttered onscreen. Marie Antoinette would surely blush at Tucker shouting, “Let them eat cock!”

Satirical, biting and laugh-out-loud funny, In the Loop is about politics, war, power plays and the coercion of legitimacy. The film, which is a beast to summarize, is set in a semi-fictional world where an American President and British Prime Minister have decided they want to go to war, even though there’s no reason to.

When bumbling, Napoleonic, British Secretary of State for International Development, Simon Foster, played by Tom Hollander (best known to American audiences for his part as Lord Cutler Beckett in the Pirates of the Caribbean franchise), accidentally endorses military action on national television, he and his newly hired, equally blundering political advisor, Toby (Chris Addison), suddenly find themselves the talk of both the United Kingdom and Capitol Hill. First he says war is “unforeseeable,” then he tells the press to be ready to “climb the mountain of conflict” and soon Tucker is saying he sounds like “a Nazi Julie Andrews.”

As unwitting allies in the run up to war, Simon and Toby are summoned to Washington D.C. where they become wedged between anti-war General Miller (gruff and imposing James Gandolfini), peace seeking US Assistant Secretary for Diplomacy (Mimi Kennedy) and her intern (all grown up My Girl star Anna Chlumsky), the head of the secret war committee, Linton Barwick (David Rasche) and Tucker’s venomous rage.

While the plot may seem unwieldy and overblown, In the Loop is one of the funniest films this year, filled with pitch perfect performances and some of the best writing in recent memory. First time feature writer-director Armando Iannucci has created a movie that is smart, witty, razor-sharp and unapologetic. He doesn’t just tackle political satire, a genre that once seemed to have become extinct with the Clinton administration, he wrestles it to the ground, puts in a half-nelson and makes it cry for its mommy, all the while, leaving the audience begging for bathroom break mercy so you can catch your breath and massage the cramp out of your stomach from laughing so hard.