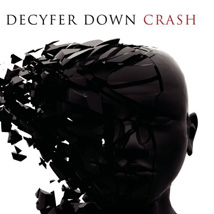 You may have heard Decyfer Down’s “Fight Like This” in conjunction with any number of Ultimate Fighting Championship promotions, and it’s only natural to think that maybe Crash (which doesn’t include “Fight Like This”) took its name from the sound of fists pummeling a face. The inspiration was actually a lot scarier: the group was involved in a serious traffic accident when their tour van slid off the road during a snow storm. After the brush with mortality the guys almost called it quits, but eventually they decided to get back to loudly kicking ass.

“Crash” leads off the album and deals with that indecision directly but the subject quickly changes to a craving for carnal delights with “Desperate.” The band’s heavy music owes a great deal to the grunge era and songs like “Fading” and in particular “Over My Head” sound like a mash-up of early Pearl Jam and Alice in Chains.

Singer T.J. Harris has a voice that’s especially suited to the grunge sound, but his work can best be appreciated on quiet songs like the ballad “Best I Can.” Decyfer Down still has a ways to go before they separate themselves from the pack, but Crash proves they’re well on their way.