The Blackout: The Best in Town 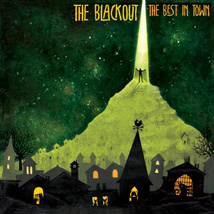 With their latest album, The Best in Town, Welsh band the Blackout have produced an album that’s unfortunately has little to write home about. Their sound is powered by driving guitars, and smooth vocals cut with harsh screaming. In other words, it’s formulaic post-hardcore.

Some of the lyrics have inspired imagery, but combine Gavin Butler’s crooning of “I hope you realized just what you’ve done” with Sean Smith rasping, “You said … You wanted me,” and songs like “Said and Done” border on screamo.

On the whole, the album has the typical sound of every post-hardcore band that has ever had a record produced by Epitaph. Now, I’m not saying it’s a bad thing. After all, judging by previous releases, it doesn’t sound like the Blackout’s sound has undergone any major changes with their jump across the pond.

But really, listen to “Save Ourselves (The Warning) and tell me these guys don’t sound like Story of the Year and the Matches (both also on Epitaph) conceived a child in a back alley. If this goes on, Epitaph might want to watch out for inbreeding.

The bottom line is that The Best in Town is not bad, but unless you count the fact that the band is a UK import, the band is really nothing special.


The Best in Town is currently available.
Article posted on 7/20/2009
This article has been viewed 1366 times.