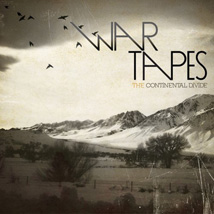 Neil Popkin, singer for War Tapes, has stated that the band has tried to create music that is dark and intense while at the same time holding on to a loud and heavy rock sound. The darkness part comes mostly from Popkin’s voice and not from the music. Popkin’s style is reminiscent of that of Iggy Pop circa Blah Blah Blah in that his moods teeter between a semi-ominous croon and a bored walk-through. Musically the band borrows very heavily from the Cure, and “Dreaming of You” and “For Eternity” in particular are blatant lifts from the Cure songbook.

One of the best songs here is “The Night Unfolds” even though it too is cut from a pattern; War Tapes is going after fans of the Killers and Franz Ferdinand with this one. All of these influences are certainly good ones, and War Tapes are on the brink of something very cool, but they need to back off the Iggy and Robert Smith love just a little so they can more clearly define their sound.


The Continental Divide is currently available.
Article posted on 7/21/2009
This article has been viewed 1492 times.