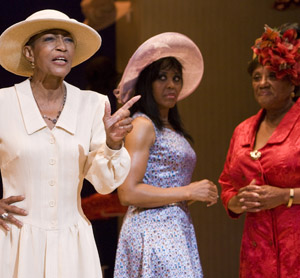 Though it’s filled with gospel, bits of soul and jazz and an accent of hip-hop, don’t think of “Crowns” as your usual musical theatre. It’s as much a musical as a rousing church service is a musical: There are songs, sermons and theatrical accounts of the struggles in a life, but “Crowns” is enchanted more with the old rituals of storytelling than it is bound in three acts stuffed with show tunes.

The play, written by Regina Taylor, is based on a coffee table book of portraits of matriarchs dressed in their Sunday livery (which still sounds like an awful idea for an 90-minute performance), but the characters are given such embodiment, with the writing rounded out equally in energy and reflection, that it’s to no surprise when calls of “Amen” resound from the audience.

For a show to work as art, as an investigation into what it means to be a particular kind of human at one time in one place isolated from but bonded to a larger humanity, the show doesn’t have to change your life. It doesn’t have to be your favorite show. It just has to have a sense of its limitations, it has to have confidence and it has to have a voice that an audience hears as real to them. And when against these odds a show like “Crowns” does work, this critic has little to no recourse to describe how or why it has its particular impact, except in abdication to quote the poet, “You are the music while the music lasts.”

Our blogging culture, our digital habit, fails theatre. With a simple hyperlink we can direct strangers to experience for themselves a great album or video. We don’t have to say anything, convince anyone; we can effortlessly present the goods.

I wish that could be done with theatre; that the aliveness of a live performance could fit on an iPod. But it can’t. So I wish you could have ridden behind my eyes and worn my ears to the opening night of “Crowns.”

The moments in which any one performance begins, flows and expires are unique, alchemical moments. The “Crowns” you’ll see is different from the one I saw, and I can’t see the same one again.

It’s this transforming of theatre that is so essential – and essentially radical. Our nervous systems need it. We need more of it.

The unknown is the volatility of theatre, and it’s about matching up your puzzle piece of a heart against an uncountable number of creative decisions made by other puzzle pieces, with more dozens of variables seated around you, on an uncertain night in shaky times. Is there an activity more experimental than to watch the stage?

Watch the women first stalk onto it like lionesses. Listen to the husky ease of soul in Ann Weldon’s voice. Listen to the crack and split of Sharon Catherine Blanks’ spiritual as she works herself into ecstasy. Watch Clinton Derricks-Carroll perfect every scene he’s in with humor and poise. Watch the sublime ballet of dying between he and Paula Kelly.

Listen to the carbonated rhythms of the three-piece band, and enjoy their intimacy with the performers; the stage melts away between them. Look at all the ghosts on stage, the missing wives and mothers represented by the four towers of hats that make up Edward E. Haynes, Jr.’s austere set design.

Neither does Israel Hicks’ direction waste a single pause. He builds the tempo slowly, knowing the characters are strong enough to sustain the emotional momentum, giving them their space, oiling the scenes, letting ample comedy pour in when necessary. He does a lot with less. He respects his actresses immensely.

Through the passions of death and rebirth, through which these church hats mark the importance of expression when expression was needed most, in times when individual expression was limited by gender and race, “Crowns” inducts its women into a wide, deep sorority as personality and decade are changed with a swapping of headgear. Banquet on costume designer Dana Rebecca Woods’ wide-brimmed straw platters heaped with double bows, lace, feathers, the cocked flirtatious saucers, the headscarves whipped into cream, the demure wafers, the barely demure cakes of cloche and pillbox hats.

Go see any play designed, acted, directed and written by professionals. It won’t waste your time. You’ll find what you like. It’s cultural medicine. But definitely go see “Crowns,” which is likely the best stage play in Southern California until it runs out mid-August.

Musical
Summer: The Donna Summer Musical Comes to the Hollywood Pantages from Nov. 5 thru 24!
1,641 views