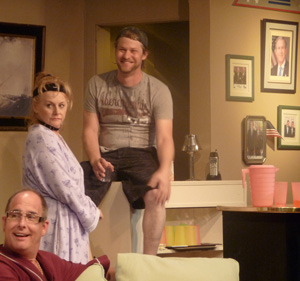 To them Jesus is the first U.S. soldier, a man who died in the Middle East so that a pack of gassy old fools could exercise their Cialis-induced libidos as a toast to patriotism. When Shirl jokes that she has the same whip as the Roman who flagellated their savior, the irony escapes her that the closest she can get to Christ is by killing him, just as the irony escapes every conservative politician as of late.

Shirl is played by Jodi Carlisle as a deliciously coherent Mae West. Jonathan Palmer as Jake makes sly work of repressed homoeroticism, passing himself off as a mere aesthete of dick. Mary Scheer plays a dry housewife with long-neglected needs of natural reproduction. Her Lorette is the more believable of the cast, bristling and deadpan and sad.

Cody Chappel and Chloe Taylor as Paul and Karen are a mismatched younger couple, the “fresh blood,” who succeed in catalyzing the play, but are quickly lost under the weight of the problems of the middle-aged. And for good reason.

Melissa Denton (Gina) and Michael Halpin (Mac) play big and loud, and you’d leave any restaurant at which they were also eating, but their clowning is really just funny poison, which we knew from the start, and it’s engaging to see Tanner direct unambiguous nastiness into the comedy through them. But it’s not like the rest of the show is heavy on empathy for these people. Everyone jousts with hors d’oeuvres-sized jealousy and prunes in the multi-jet hot tub of loathing.

“Wife Swappers” is an allegory of the Republican party as it has spectacularly degenerated. The couples are estranged from their social circles, even their children, leaving them affluent maladjusted loners. They stand on both sides of arbitrary morals. They have a set of rules for screwing each other, rules abided only at convenience. They get along fine until someone owes money – then they’re outraged to discover that the debt of loveless sex can’t be repaid, and that the friendships have been as meaningless as were promised and are bankrupt.