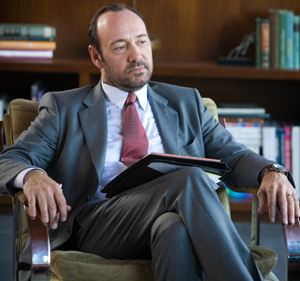 What happens when the person you depend on to keep you sane is coming unhinged?

Kevin Spacey stars as Dr. Henry Carter, a best-selling author and psychiatrist who treats the biggest wheelers and dealers in Los Angeles. That is, when he’s not sucking on a joint like it’s his oxygen tank so he can blunt (pun intended) the memory of his recently deceased wife.

Taking turns on his couch: a former A-List actress who’s now tabloid fodder (Saffron Burrows in an enjoyably ornamental role), an alcoholic actor desperate to cheat on his wife (Robin Williams in a delightfully restrained turn) and an OCD mega-agent (Dallas Roberts, who steals the show and gives “Entourage”’s Ari Gold a comedic ass whoopin’).

But the film isn’t just about the troubled minds of Hollywood insiders. It’s about how to love someone and let them go, what grief is “supposed” to look like, how trust is gained and lost and why keeping yourself numb is sometimes more difficult than feeling pain. Told through intersecting storylines, Shrink is what Crash would have been if it were about emotional issues rather than racial strife.

Rounding out the cast are Keke Palmer, Mark Webber, Laura Ramsey, Jack Huston and Pell James, who is utterly charming.

Delving into the troubled lives of Hollywood’s elite is hardly the place to mine for sympathetic characters: This year’s earlier, atrociously awful release The Informers was painful proof of that fact. But Thomas Moffett’s script avoids the trap of self-indulgence. His writing is honest, simple and relatable. Combined with an outstanding cast and Jonas Pate’s direction (minus his proclivity to shoot through obstructions so the frame is filled with partially shrouded faces, presumably to make the audience feel like we’re peeking around someone else’s head to get in on the conversation), Shrink becomes a beautifully melancholy film about the health of the heart and the mind.

Now, how does that make you feel?