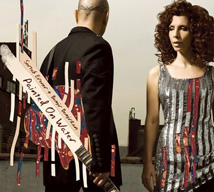 Most of us would probably associate “Turkey” with cranberry sauce and not music, but two of Turkey’s (the country) biggest musicians have made it to the United States in their first international collaboration. And it’s about time.

Painted On Water, the self-titled album from Turkey’s Sertab Erener and Demir Demirkan is a hauntingly beautiful mix of loungy, bluesy jazz and soft rock that will leave you breathless. Erener’s strong, sexy voice floats out from all but four tracks, and you can see why she’s one of Turkey’s most celebrated vocalists, while Demirkan’s musical arrangements showcase his talent as a guitarist and composer.

The album loses points for some silly lyrics like “You’re so in love you could do some crazy stuff” from “Mad Love” (I really want to think this was just a bad translation from Turkish, but I still laugh every time.). Most of the lyrics are tender and heartfelt.

Overall, Painted On Water is a tour de force of beautiful lyrics and strong composition, but this album is probably more suited for the bedroom than the pop charts.


Painted On Water is currently available.
Article posted on 7/22/2009
This article has been viewed 1369 times.