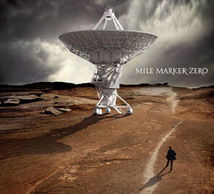 Mile Marker Zero promise a new sound in progressive metal with their self-titled album. With driving guitars and intense drumming, the band’s music certainly feels like the epitome of metal ... until you get to the vocals that are almost too pretty to be mashed up with the backing music.

The band members have backgrounds in classical music, and their sophistication and mastery of composition really shows. Each song has a certain unique theatricality, showcasing different movements that alternately highlight the vocals and the guitars, and instead of sounding jumbled, it all works out very well together – both on individual tracks and as a cohesive album.

Although some tracks sound reminiscent of System of a Down or Stone Temple Pilots in places, on the whole the band is more Dream Theater than anything else. Mile Marker Zero’s sound is anything but ordinary and definitely worth a listen.


Mile Marker Zero is currently available.
Article posted on 7/22/2009
This article has been viewed 2783 times.