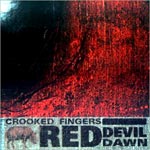 Red Devil Dawn is perhaps the least dynamic record I have ever heard. At nearly 40 minutes long, the album is a testament what happens when an engineer gets so stoned that they forget how to mix a record. Tones are flat, arrangements are muddled and the sound quality is ripped right from a cheap four-track recorder. Red Devil Dawn is a record that is inaccessible not because of a progressive quality. but rather because of the ineptitude of its conception.

Poor mixing and recording aside, the music itself suffers from a lack of movement. Songs seem to run into each other and never hit a range that captivates the ear. In fact, as the record pushed toward the forty-minute mark, it became increasingly difficult to recall one melody that had its own distinct flavor. Even singer Eric Brachman sounds bored. His crooning makes him sound like the depressed love child of Tom Waits and Neil Diamond. Not that these two would have a love child...but you get the disturbing imagery I am invoking.

Overall, I have a hard time recommending this record to anybody.