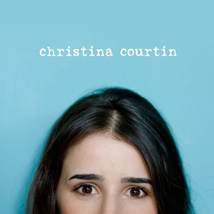 With a sound similar to Kate Nash, without the bitterness and cynicism, Christina Courtin’s new self-titled album is one filled with emotion, brought out by passionate piano and violin accompaniment as well as heartfelt vocals. It is the perfectly peaceful spring and summer album.

Melancholic songs like “Mulberries” and “February,” that are saturated in soft and depressing vocals and instrumentals, are directly followed by “Laconia,” a dark and mysterious ballad – similar to a lullaby – while “Green Jay” is bright, breezy and carefree. The tone is consistently tranquil, but each song has its own personal flair and uniqueness, something that distinguishes it from the others.

If you’re looking for an album furnished with beautiful accompaniment and singing to listen to while going on a calm bike ride, while relaxing at the beach or for a quite drive up the coast, Christina Courtin’s your girl.


Christina Courtin is currently available.
Article posted on 7/22/2009
This article has been viewed 1532 times.