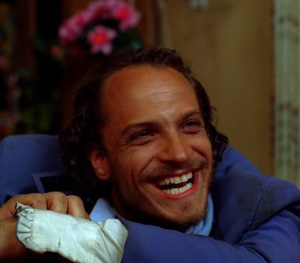 It’s the age of addiction, and everyone’s an addict. The media, politicians and anyone with power treats us that way – like we’re a hopeless race of information junkies. We want news fast, answers even faster and if someone makes a mistake, you’d better believe the whole world will know in the time it takes to upload video onto YouTube.

Director and co-writer of American Cowslip, Mark David toys with the idea that the quirks in life are fueled and maintained simply by the addiction that has become America’s disease.

In a small town in the remote California desert, Ethan Inglebrink (Ronnie Gene Blevins) is an agoraphobic heroin addict who is obsessed with his garden. The few enjoyments Ethan has in life are his poker nights with his elderly neighbors (Cloris Leachman, Diane Ladd, Priscilla Barnes) whom he has convinced that he has diabetes in order to explain his frequent use of syringes.

Ethan’s plan to evade eviction for another month is to win the $10,000 first prize in the “Garden of the Year” contest. The druggie is particularly interested in perfecting his “American cowslip,” a beautiful rare flower that will be the centerpiece of his garden.

This dark comedy follows the last days of Ethan’s life as he struggles to find purpose at a time when it might be too late to even matter. Spiraling down a dark and messy hole of drugs, self-loathing and insanity, Ethan finds true love in Georgia (Hanna Hall), his beautiful 17-year-old neighbor who wants to leave the small town to evade her abusive father (Bruce Dern).

Without spoiling the end, Ethan pays for his self-indulgent lifestyle, though it is the entire neighborhood block that comes to realize that everyone is an “Ethan,” because passion is at the root of human nature.

American Cowslip is a comedy that makes subtle jabs at the absurdity of the current “normal” American lifestyle. This film is reminiscent of 2000’s Requiem for a Dream, though in many ways it also parodies this and other films directed toward making a statement about America’s drug pastime.

In fact, this film is so absurd, you can’t help but laugh as Ethan convinces his old lady friend to score him some heroin under the guise that it’s insulin. And when it comes down to it, even death is a silly coincidence.


American Cowslip releases in select theaters July 24.
Article posted on 7/24/2009
This article has been viewed 3339 times.