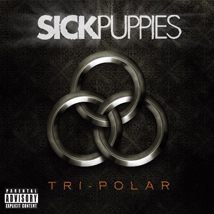 Two of Sick Puppies’ newest tracks, “You’re Going Down” and “Street Fighter (War),” have garnered considerable airplay as the official songs of the “WWE: Ex-treme Rule” TV show and video game. Despite the attention, their third studio al-bum, Tri-Polar, doesn’t live up to the hype. It is inconsistent and shifts between nu-metal and rock, giving the impression that the songs could be performed by different bands.

There are, however, several gems that showcase the genius and potential of the band. A standout is “Master of the Universe” that boasts a sitar-layered guitar solo and quirky slap bass intro.