Holly Madison: Reveals Her Naughty Side in “Peepshow” 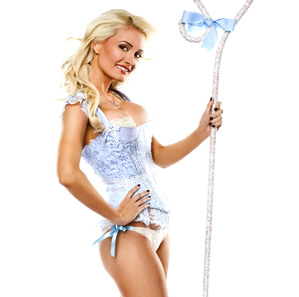 What does a former Playboy Playmate and Hugh Hefner’s No. 1 girl do after conquering reality TV? Holly Madison runs off to Vegas and bares it all as a sizzling showgirl.

After starring in the hit series “The Girls Next Door” and strapping on her stilettos for a brief stint in “Dancing With The Stars,” the 30-year-old model is once again heating things up by starring in Sin City’s “Peepshow,” a modern burlesque extravaganza where anything goes!

“I’ve always wanted to do something like this,” explains Madison. “I’ve always been a fan of burlesque, especially Dita Von Teese. ‘Peepshow’ is a huge, Broadway-style, high production value show that has gotten great reviews in Vegas. It’s been a dream come true to be a part of it.”

“Peepshow,” which originally starred actress Kelly Monaco and Spice Girl Melanie Brown, tells the story of Bo Peep (Madison), a timid girl who is guided by the Peep Diva to become a confident sexpot. While the blonde bombshell explains how she identifies with her character, this leading lady knows how to rule a crowd of hundreds.

On stage, she shimmies and swivels her hips while wearing nothing more than a corset and a thong. Leading a pack of dancers glittering in rhinestones, Madison easily outshines them all.

“Burlesque is just so beautiful to watch,” she states. “It’s about beautiful women, props and costumes.”

Since debuting in “Peepshow” earlier this summer, Madison, who once lived in the Playboy Mansion, has no regrets on leaving to start a new chapter in her life.

“I’ve made Vegas my home and I love it here!” she exclaims. “It’s like a small town and a big city all in one, and there are so many things to do. I like to check out new shows with friends and just see what the city has to offer.”

Currently, Madison is preparing a new reality TV series based in Vegas, as well as a lingerie line, which are both expected to debut in the fall.