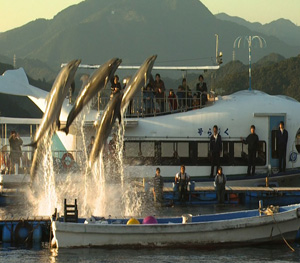 Dolphins jumping on location of The Cove
(Credit: Courtesy of Oceanic Preservation Society)

Well-deserving winner of the Audience Award at Sundance, The Cove is an astonishing exposé of the dolphin industry in the small town of Taiji, Japan. Equal parts spy flick, thriller and nature documentary, The Cove takes the audience on one hell of a journey.

In the 1960s, Richard O’Barry introduced the world to “Flipper,” and the dolphin obsession as it exists today was born. Today, O’Barry is one of the world’s leading activists for the same cetaceans that he popularized, seeking to free every last one of the intelligent mammals from theme parks and zoos where they are often mistreated, raised in unsatisfactory conditions or die young from the stress of being far from their pods and ocean life.

It was O’Barry who provided the inspiration for Louie Psihoyos’ bold film, acting as guide to the intrepid film crew, which includes free divers, mold makers and even a former military electronics expert. Faced with arrest and deportation and followed around the clock at every turn by those guarding the secret of Taiji’s captive dolphin trade, the film details their trials and triumphs in a nonstop thrill ride.

It’s a twilight zone scenario: At a glance, one would come to think that Taiji’s residents hold cetaceans in ultimate reverence. There are statues and murals of dolphins and whales scattered about town; there’s even a whale museum. And yet, a dark underworld exists in the most unlikely spaces.

In a secret section of a national park, dolphins are herded to allow trainers from the world’s theme parks, zoos and tourist traps to have their pick of the highly sought after creatures. Once the trainers have departed, the horror begins.

The remaining dolphins are indiscriminately slaughtered. In one heart-wrenching scene, a young dolphin escapes the massacre, a trail of blood streaming behind it. As the horrified filmmakers look on, the dolphin draws its last breath and sinks into the blue.

Their meat will be sold in stores to an unsuspecting public; often mislabeled as whale meat despite claims that its consumption can lead to mercury poisoning.

In the end, the team’s efforts are rewarded with a devastating and excruciating look into this brutal reality, the nightmarish images and the heartrending screams of the dolphins set against a backdrop of silence. If you don’t find yourself choking on tears, you’re lacking a soul.

The Cove is both riveting and deeply moving. It will change the way that we look at our relationship with dolphins forever. Hands down, this is the best documentary to emerge this year.