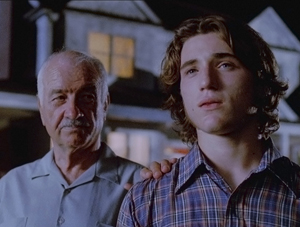 So I have a confession to make: I love Ron Perlman. The man can do no wrong in my eyes. Whether he has to speak French in The City of Lost Children, decked out in red makeup for Hellboy or doing voices for kids cartoons, Perlman is just awesome. So I was really excited when I saw his name on the poster for Local Color.

Originally made in 2006, Local Color is George Gallo’s semi-autobiographic story about John (Trevor Morgan), an 18-year-old aspiring artist with a homophobic father (Ray Liotta) who is more than a little worried about his son’s preoccupation with painting instead of girls. In an effort to hone his talents, John befriends the town’s resident artist, Nicoli Seroff (Armin Mueller-Stahl), who has given up on art and on life. Although Seroff is dismissive of John at first, the two forge a friendship that brings perspective to both of their lives.

With great performances from Morgan and Stahl, this affecting coming-of-age film is tender, bordering on sappy, but with an air of authenticity borne from real-life experience. I will admit that I was rather disappointed that Perlman only had a supporting role, but he plays gay remarkably well, considering that he’s usually the guy with the big guns.

While it did have a good story and showcased some amazing art, Local Color moved too slowly for it to be entirely enjoyable. Yes, the story is beautiful, but it’s also nostalgic and a bit of a tearjerker. Now, if you like these sorts of coming-of-age stories, you will probably like this film, but if you’re not an art major, it’s kind of hard to really appreciate it. The story obviously has an importance for Gallo and has both hilarious and poignant moments, but it’s also overly indulgent and romanticized.