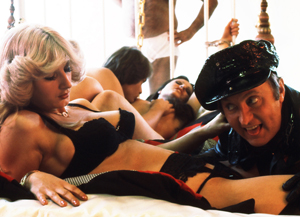 A scene from the ABC of Love and Sex, featured in Not Quite Hollywood
(Credit: Courtesy of Magnet Releasing)

Correct me if I’m wrong but the only thing the American Cinema Blockbuster Machine has produced so far this summer is a poorly written sequel that no amount of Megan Fox’s emaciated body or Shia LaBeouf’s boyishness can fix. That, and another Judd Apatow movie where grown men no doubt have many warm and fuzzy emotional breakdowns.

Let’s face it, the American Cinema Blockbuster Machine can feel kind of stale sometimes. And, of course, every actor in town is trying his/her hardest to get into this machine that does not always produce quality. How refreshing it was, then, for a film fan to watch Not Quite Hollywood.

This documentary celebrated and covered Australian genre cinema, Australian exploitation movies of the ’70s and ’80s.

Wow! What a surprise to see an overabundance of gore, skin, stunts and sometimes even vomit. Not Quite Hollywood was unapologetic about showing all of those visual delicacies.

Director Mark Hartley takes us through this period by showing the best clips from the best of these movies. What results is a feast for the eyes that no amount of Internet surfing could reproduce.

Had I been subjected to the full versions of any one of these movies, I would have walked out after the first 10 to 15 minutes. Also, not being Australian, it may have been hard for me to understand some of these culture-defining flicks.

But Hartley, who has worked as editor or an assistant editor on many films, including Strictly Ballroom, seems to capture all the greatest moments from all of those movies.

Not Quite Hollywood releases in select theaters July 31.