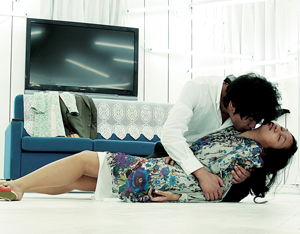 What is it with the recent surge of vampire media? I mean, I’ll admit, I liked Twilight (the novel) just as much as the average female reader, but with movie versions of the Stephenie Meyers quartet, a new installation of the Underworld films and shows like “True Blood,” just to name a few; is it just me, or does it feel like the world is being taken over by a vampire frenzy?

But don’t let that stop you from checking out Thirst. It’s really not your typical vampire story.

Thirst is a story about Sang-hyun, a completely selfless priest (I know, I know, but stay with me here) who enrolls himself in a study to develop a vaccine for a deadly virus. When the disease takes over, the presiding doctors must give Sang-hyun a blood transfusion to save his life. Little do they know, Sang-hyun received vampire blood and now he’s one, too.

But Sang-hyun doesn’t just develop a taste for blood. He becomes a creature that thirsts for earthly pleasures – that is, everything that he is trained to deny himself as a priest. As Sang-hyun battles with his horrifying new desires, a childhood friend asks for his help and makes it all the harder for him to decide whether he should retain his humanity or give in to what he has become.

I guess my first clue should have been Thirst’s Jury Prize win from this year’s Cannes Film Fest. Director Park Chan-wook (Old Boy, Lady Vengeance) brings a world of dichotomies to life with a subtle grace, highlighting the daily struggle of good and evil, tradition and progress, but succeeds in not overdoing the melodrama. In fact, with the over the top sound effects and silly antics, parts of Thirst feel like they come straight out of a campy classic horror movie, but with such heavy themes and a long run time (133 minutes) these frequent bits really make the film enjoyable.

I was also surprised and refreshed by the depiction of the vampires in the film. For the most part, they look like normal people. Apart from superhuman strength, near immediate healing and burning in sunlight, none of the typical vampire markers exist.

Apart from the expected minor grammatical problems in the subtitles, and its uncomfortably long run time, Thirst is overall a beautifully executed and thought-provoking film. So if you’re looking for something fluffy, this might not be the one for you. But then again, what else did you expect from a Cannes-winning film?