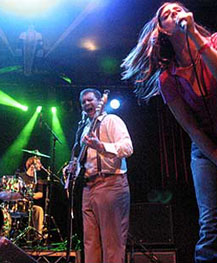 “I had a vision of a different kind of a band that I always wanted to do,” says Agent Sparks singer and guitarist Ben Einziger, “but when we started, I really didn’t know what it was going to be.”

“I was the singer,” chimes in keyboardist Stephanie Eitel, “but whenever Ben would bring songs to me and say, ‘What do you think of this?’ he would sing it and play it. I’d be like, ‘Why are you asking me to sing this song? This is your song and you sound amazing singing it.’ So it just started morphing into this dual lead singer thing.”

Such was the musical trial and error of Agent Sparks, who finally found their unique sound by blending the male and female harmonies of both Einziger and Eitel. Completed by bassist Paul Fried and drummer Ryland Steen, finding the band’s sound proved more of a meandering journey than a quick destination. Yet after finding that sound, describing it wasn’t always easy, especially by its own members.

Take the upbeat melodies of ’80s new wave, throw in a splash of indie with an avant-garde bent and you get music that’s hard to describe, but also completely original. With expressive lyrics and danceable, feel-good energy, Agents Sparks has often been compared to ’80s staples the Pixies, the Go-Go’s and X.

Having completed their five-song EP within a matter of months, the members of the band, many formerly of the band Audiovent, came with the experience to take a flying leap onto the scene. In fact, the band was able to covet a spot at the El Rey Theater, booked through “a friend of a friend of a friend,” along with a residency at the famed Viper Room.

For their first collection of songs, Eitel says everyone was on the same page lyrically where anger and pointed lyrics became the mantra for shared feelings. Songs such as “Soldier in High Heels,” Einziger says, is based on anger directed at himself.

“The story is about how I’ve always felt in my own skin. I’ve always had this feeling of inadequacy and insecurity that I suck at everything that I do,” he reveals. “That’s what that song is about – being irritated and frustrated with my lack of confidence. But not to feel sad, because sometimes I’m really way too confident for my own good.”

“The lyrics to ‘Soldier in High Heels’ are great though,” says Eitel. “It’s like being a soldier in high heels where you feel like you’re up here, but as soon as you step in the mud, you sink.” In other words, says Einziger, “I’m like this buff guy, but at the same time I’m a pussy.”

Another example is “Camouflage” with its dreamy, psychedelic rock sound and haunting chorus filled with the aura of impending doom. A sound that ties well with the lyrics, which are based on Eizinger’s reaction to the news of President Bush’s idea to possibly reinstate the draft.

“It wasn’t volunteering to be in the army,” Einziger states, “but basically you have to get up and go when you’re called. I was angry and scared. Seeing all these young kids, people my age and way younger, getting ready to go to war. It just blew my mind that it had come to this.”

With the combination of catchy songs and dripping talent, the band’s hard work has paid off with their recent signing to Immortal Records. The next step is a full-length album, produced by Tony Berg (David Bowie, Aimee Mann) and fellow musician and Ben’s brother, Mike Einziger of Incubus.

“I’m so excited to get back to the drawing board again,” says Eitel about returning for more collaborating and recording with her bandmates. “We have a lot of music, a lot of potential, a lot to work on.”

Suddenly, Einziger interrupts and returns to the question about how he’d describe the sound of Agent Sparks. “Our music is like a mighty switchblade,” he says, half-joking and half not knowing what he’s about to say. “When you open it up, it’s dangerous.”