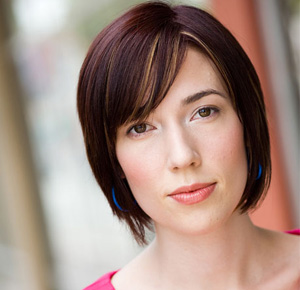 In a few days, high-flying celebrities like Jessica Biel and Beau Bridges are taking the stage at the Hollywood Bowl for a highly anticipated production of the classic musical “Guys and Dolls.” Alongside Biel and Bridges are the likes of serious theater actors Ellen Greene and Brian Stokes Mitchell, as well as a newcomer who plans to make a distinct impression on her costars.

“I might throw up all over them,” jokes actress Grace Wall, who will play the role of Martha. “They are my heroes. They are the people I look up to. Ellen Greene is a musical theatre legend.”

A recent graduate of UCLA’s Ray Bolger musical theatre program, Wall is not-so-green when it comes to the stage. Her resume is full to the brim with parts she’s accumulated throughout the years. She even garnered an award from L.A. Weekly for best supporting female performance.

For Wall, the acting bug bit her young. She attributes her love for the stage as a product of her mother’s career as a musical theatre star.

“My mom was on the first national tour of ‘Beauty and the Beast,’” professes the actress about her childhood growing up in the business. “She took me on tour with her. It was its own education. I was always surrounded by the theatre community, which is what I love and feel at home with.”

In a career that is especially temperamental, the actress, who admits she is a difficult “type” to cast, is in it for the long run.

“I know what the sacrifice is,” she admits. “But I can’t picture doing anything else with my life. I love it so much. I would be so bored with any other career. So I don’t care if I have to wait on tables.”