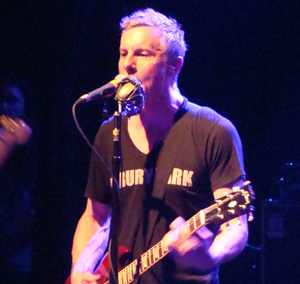 Are you gonna save me?” After re-scheduling the original April gig to July, the Toadies finally took the stage, but not before making many in the El Rey suffer through three subpar to mediocre bands.

I’ve never seen so many people stand idly during a rock show. I spotted someone who fell asleep during the Willowz’s set, and Ginger (from the Wildhearts) coerced the audience into clapping and shouting to “warm up” the audience for the Toadies. His greatest applause came as his set ended.

So when the Toadies hit the stage, quick sighs of relief, followed by rabid cheering assured me this wasn’t going to be a lame gig on a Friday night. Everyone was into the set.

The Toadies were tight, like bumper-to-bumper-traffic-on-the-405 tight. Without instruction, Todd Lewis abruptly stopped singing during “I Come From The Water” and let the audience do it for him. Lewis would often laugh and smile – even he couldn’t believe the audience reaction.

The real highlight wasn’t even “Possum Kingdom,” the song that relegated this amazing band to one-hit-wonder stardom. It actually came during the band’s first encore song, “Blackslider.” The crowd went nuts and sang along with every word. CDs and MP3s will never replicate how great a song sounds unless it’s live.

After finishing their set, the audience wouldn’t relent. Lewis convened with Mark Reznicek (drums) and Doni Blair (bass). After a minute of discussion, Lewis said, “You guys aren’t tired, are ya? We got 10 more minutes!” And with that, the Toadies extended their set and finally ended with “I Burn,” the closer on Rubberneck.